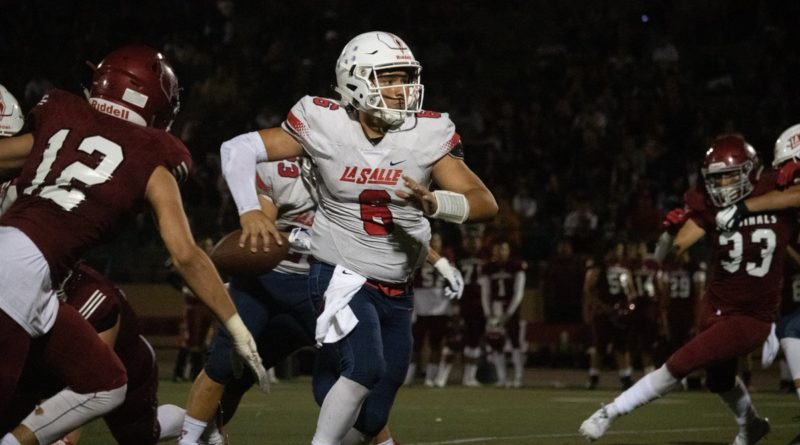 We’re seeing players at every level of football get chances earlier and earlier in their careers. Clemson quarterback Trevor Lawrence won a college football national championship as a true freshman last season. In the NFL, Cardinals’ quarterback Kyler Murray has started all three games of his rookie campaign so far this season.

If you can play, you can play. Inexperience is becoming less and less of a factor when it comes to seeing the field. This movement is coming to high school football as well. It used to be unheard of for a freshman to get playing time at the varsity level. That’s no longer the case.

With that in mind, Scorebook Live takes a look at the Top 30 freshmen in the LA City Section and Southern Section. The freshmen listed below are all on a varsity roster and the list is in alphabetical order.

Bachmeier has caught 12 passes for 176 yards and two touchdowns so far this season.

Burgueno has already made ten tackles this season, including one for loss.

Calvin has already recorded three sacks for Muir. He’s versatile too. The freshman has punted and played receiver in 2019.

Conklin hasn’t had the easiest transition to Southern California high school football, but he’s still getting chances. He’s played in two games and thrown for 222 yards and a touchdown.

Davis has played in three games for Serra. He’s made five tackles and one sack.

Davis is putting together quite the freshman season. He’s rushed for 359 yards and five touchdowns. He also has a receiving TD.

Alemany head coach Casey Clausen isn’t afraid to play underclassmen and Frausto-Ramos is a prime example of that coaching philosophy in action. The freshman has made 24 tackles and recorded one sack this season.

Gonzalez has been a varsity contributor since Norco’s first game of the year when the Cougars went to Arizona and beat Williams Field 52-27. Gonzalez and the rest of the Norco offensive line have done an excellent job protecting star quarterback Shane Illingworth so far this season.

Gutierrez has completed 45 passes for 414 yards and four touchdowns in 2019. Imagine what the freshman will look like as a senior with three years of coaching from Matt Bechtel under his belt.

Henjum has played offense, defense and special teams for Saddleback Valley Christian in 2019. He’s been most impressive on offense, where he’s caught 12 balls for 207 yards and two scores.

Idleburg-Gomez has been a contributor to a Cathedral offensive line tasked with protecting sophomore quarterback Lucas Lenhoff. The unit has done a nice job. Through five games, Lenhoff leads the Southern Section in passing yards, per MaxPreps.

Jones has two interceptions for a 5-0 Alemany team.

Keeles has been the best freshman in the City Section this season. He’s intercepted two passes and made four catches on offense.

This kid can play. If he’s not the most impressive freshman on this list, then he’s in the top three. Lemon has caught 19 passes for 366 yards and two touchdowns so far this season. He’s also intercepted four passes in five games. His father Michael was a 2,000 yard rusher for La Mirada and his uncles starred for the Matadores as well. It runs in the family.

Lewis has had a great start to his high school career for Oaks Christian returning kicks and playing in the secondary. He’s made 28 tackles and has an interception.

He might not be playing against the highest level of competition, but Malaga is averaging over ten tackles per game for Fairmont Prep in 2019. He has 46 in four games.

You wouldn’t think Mauigoa is only a freshman; he stands at 6-foot-5 and weighs 275 pounds. The word that gets thrown around when speaking with members of the Aquinas football program is “beast” when their asked to describe their emerging lineman.

Munoz is having the best season of the freshmen QB’s. He’s completed 46 passes for 963 yards and 14 touchdowns. Munoz has led La Salle to a 4-0 record to begin the year.

Nelson made his first start of the year (and his career) last Friday and led Los Alamitos to a 27-0 win over Carson. He tossed two scores in the victory.

Parra has caught 16 passes for 242 yards and a TD. He also has an interception on defense.

Westlake may be having a down year (the Warriors are 1-4), but they’ve found a running back for the future. Reed has rushed for 332 yards and three touchdowns in five games. He also has a receiving touchdown.

In three games, Robles has completed 50 passes for 701 yards and five touchdowns so far this season.

Sanders-Parker is averaging over two tackles per game so far in his freshman season for Cathedral. He’s viewed as a future four-star prospect by the Cathedral coaching staff.

Semonza backs up Mission Viejo starter Peter Costelli and he’s looked solid in his limited varsity playing time. Semonza has completed 85% of his varsity passes and has thrown for a score and rushed for two.

Thomas is another first-year running back to make note of. The freshman has rushed for 278 yards and three touchdowns so far this season.

Toven has played on both sides of the ball so far in 2019, but he’s made more of an impact in the secondary. He has one interception on the year.

Uiagalelei is only the second freshmen to play varsity at St. John Bosco under head coach Jason Negro. Not even Uiagalelei’s brother DJ, the consensus top quarterback in the nation whose committed to Clemson, played that soon.

The younger Uiagalelei recovered a fumble in the Braves’ first game of the year against DeMatha. He’s already developed a reputation as an excellent blocker.

Valencia has made three catches in two games as a freshman. He holds an offer from Oregon.