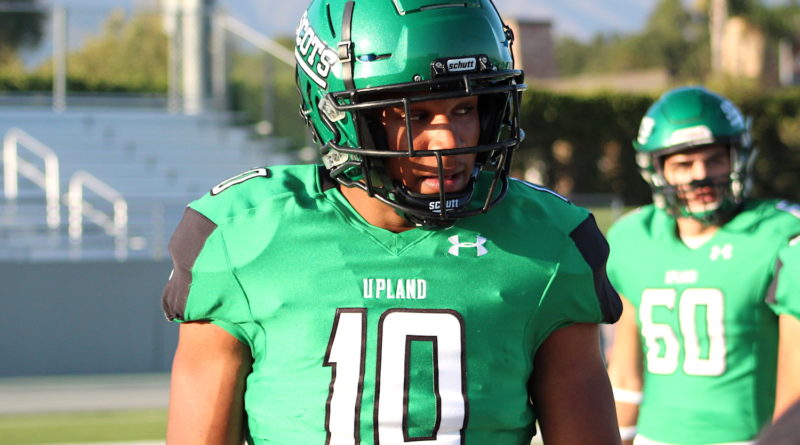 We were treated to two Top 10 Southern California football showdowns last week, and they did not disappoint.

JSerra got off to a strong start against Calabasas and held on to win 31-20. And in a rivalry matchup between the best two teams in the southern region of Los Angeles County, Narbonne edged out Serra 28-21 in a back-and-forth battle that came down to the last minute.

This week, a large percentage of the best teams are taking a bye-week to rest up before league play begins. But there is still an exceptional slate of games for fans of Southern Section and City Section football. Here are 10 to watch:

While they’re coming off an ugly loss to Loyola, there’s a decent chance that Valencia will win out through league play without much of an issue. This is the best chance we will have to see how they really are until the Division 2 playoffs. Can they make a game out of it against Calabasas?

Serra is in midseason form after nearly knocking off Narbonne in a heated matchup last week, and is one of the last teams anyone would want to face right now.

Cathedral is off to a nice start to the season with their eyes ahead to the Division 3 playoffs. With the potential of facing Grace Brethren, Corona del Mar, or Alemany early in the playoffs, keeping it competitive against the Cavaliers would be a major boost going forward. And if they pulled off the upset, it would radically improve their playoff bracket.

Sierra Canyon has some nice wins this season including Lawndale, but struggled to pull away from St. Paul last week. Bakersfield has shown the ability to stay competitive against great competition, such as Calabasas and Paramount. If Sierra Canyon overlooks them, they could be in for a surprise against a gritty Drillers squad.

Narbonne is coming off an exciting win against their biggest opponent in the south Los Angeles area, Serra. Lawndale, the reigning state champion, has made quick work of every team they’ve faced this season other than Sierra Canyon. That includes a strong win over Carlsbad. Narbonne has a very strong edge, but Lawndale is capable of pulling off the upset.

Talented Rancho Verde has won three blowouts this season. However, the one big name they faced, Upland, beat them soundly. Norco is in another ballpark, but if Vista Murrieta and Rancho Cucamonga were able to push them late in the second half, Rancho Verde can definitely compete against them.

As good as the first five games on the list should be, the next five are on another level of exciting.

Oaks Christian has been as up-and-down as anybody out there this season, period. In their stacked preseason, they have won defensive battles against Chaminade and Sierra Canyon. They’ve also lost winnable games to Grace Brethren and Murrieta Valley, and gotten blown by Alemany. That said, the loss of Mister Williams has been devastating for them, and his return will be crucial.

Helix has been arguably the biggest surprise in Southern California. They started with a nice win against Cajon, nearly beat an elite Utah team in Herriman, and have now stunned Cathedral Catholic and St. Augustine in back-to-back week. Their victory over Cathedral Catholic came a week after the Dons upset Corona Centennial.

Helix has all the momentum in the world and Oaks Christian has none. But the talent is equal, and both teams are hungry. This should be one heck of a game.

That said, it’s Mater Dei, who’s fresh off of easily beating the second-ranked team in the country, Saint Frances. St. John’s is outstanding competition, but it’s yet to be challenged that Mater Dei is practically unbeatable.

While Corona del Mar hasn’t come close to losing yet this season, they haven’t faced a team capable of pushing them. Palos Verdes did an excellent job a few weeks ago just to keep that game within 10 points. San Clemente is also unbeaten, but Edison and La Costa Canyon have both come close. As a result, Corona del Mar has the small edge here, but this should be a fun battle of offensive fireworks against elite defense.

Arguably the best team in the Mission League versus one of the better teams in the Trinity League is the matchup we all need before league play starts. Both of these teams are Division 2 playoff contenders who could plausibly even sneak into Division 1, so this game could have some playoff ramifications as well.

Upland is more than capable of pulling off the upset, and Mission Viejo always brings a great crowd and atmosphere. Justin Flowe and Upland’s electrifying defense against a Diablos squad that is strong in every single facet of the game? It has the potential to be one of the most exciting games of the season, with playoff seeding on the line to boot.