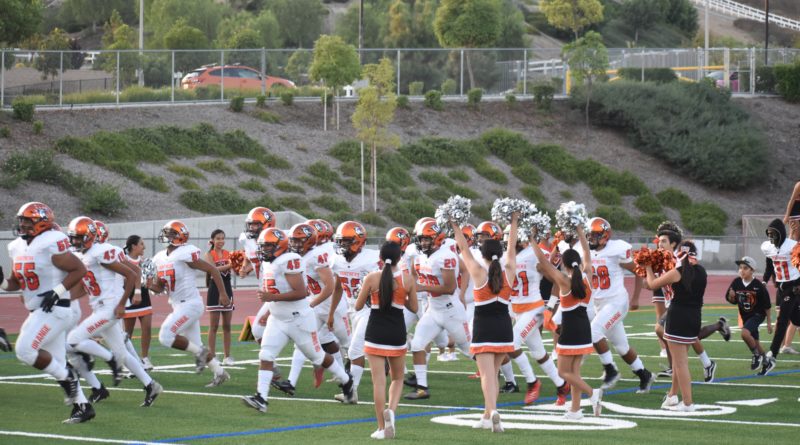 On September 5, the Orange Panthers were down 27-6 with less than six minutes remaining in the game. To most in attendance, the game seemed out of reach.

Turns out it was far from over.

Orange had kept the game competitive against a bigger Yorba Linda squad, but were struggling with the Mustangs’ size up front as the game wore on.

Yorba Linda’s large offensive line had kept Orange from stopping the run all night. On the defensive side, the Mustangs had a bulk advantage on the line that was giving Orange’s offensive line trouble. The Panthers had several promising drives that died on failed third and fourth down conversions.

Then QB Daylen Pedroza hit Issac Galvan for a touchdown with 5:51 remaining in the game. The game was still barely within reach, but the lid on the end zone that had only been breached once for Orange by WR Andrew Andrade in the first quarter was lifted.

Orange went for an onside kick down 27-12, and it was on point. A few big chunk plays and mere seconds later, Pedroza found Galvan again in the end zone. The PAT was good and the lead was down to 27-19 with roughly five minutes remaining.

Coach Robert Pedroza had the option to revert to a normal kickoff. It was hard to imagine that the Panthers could pull off another perfect onside kick. But giving the ball back to Yorba Linda was not an attractive option. With running back Keaton Haddad and the Mustangs’ strong offensive line, Yorba Linda had the right formula to slowly run out the clock and seal the victory.

So Pedroza opted for another onside kick. And it worked. Orange stunned Yorba Linda with a perfect onside kick and another swift touchdown –Pedroza to Galvan yet again with only 30 seconds elapsed on the drive.

With nearly 4:30 still left on the clock – less than 90 seconds after trailing by 21 points – Orange had tied it up in front of a stunned Yorba Linda crowd. They defended impeccably and held the Mustangs off for the rest of regulation. The Panthers even had the ball and a chance to win it with about 30 seconds left in the game. But it went to overtime.

Orange’s outstanding defensive stand continued through overtime, and after neither team scored in OT, the game went to double-overtime. Ultimately, Haddad put Yorba Linda up 34-27 with his fourth rushing touchdown on the night, and the Panthers couldn’t match it.

They were crushed after coming so close to pulling off what would’ve been a miraculous comeback, but Orange had just played one of the best quarters of football they possibly could. In 90 seconds, the Division 10 Panthers erased a three-touchdown lead against one of the better teams in Division 5. And they held them scoreless until the end of double-overtime as well.

Coach Pedroza implored his deflated squad to keep their heads up. And since that loss, the Panthers have won back-to-back games by a combined score of 142-13. Additionally, since early in the fourth quarter against Yorba Linda, they’ve outscored their opponents by 163-20.

The week after that loss, Orange crushed one of their biggest rivals, Canyon (Anaheim), 66-6. Canyon’s lone score came on a 79-yard touchdown pass on their very first play of the game. After that, Orange scored 58 unanswered points.

This past Friday against Westminster, the Panthers finished with an even larger margin of victory, winning 76-7. They are now 3-1, and their only loss was to a Division 5 playoff contender in double-overtime. Orange is in outstanding position to potentially win out the rest of the season, including the playoffs.

The Panthers close out preseason play Sept. 26 against 0-4 Irvine. Orange should be considered the heavy favorite to win the Orange Coast League. Calvary Chapel, the other top contender, has been very solid at 4-0, but their strength of schedule isn’t nearly what Orange’s has been. Costa Mesa, Santa Ana, Estancia, and Saddleback will all have their opportunities to prove themselves as well, but for now Orange looks like the clear team to beat.

If the Panthers win out in league, they’ll enter the CIF Southern Section Division 10 playoffs with one of the top overall seeds.

Crescenta Valley is formidable though.

The Falcons are 4-0 with double-digit victories over Pasadena and Redondo Union. They are probably the top threat to Orange’s chances at potentially both snagging the first seed and winning the whole division. Even if Orange wins out until the divisional playoffs, Crescenta Valley will inevitably have one advantage: Almost every team in Crescenta Valley’s league is stronger at this point in the season than Orange’s league foes.

Additionally, Division 10 has Western, JW North, Segerstrom, and Norte Vista among a host of teams that all have legitimate chances to win it all. Some divisions just have one or two heavy favorites that are almost sure bets to win the championship. But D-10 projects to have full parity at the top. While Orange and Crescenta Valley look like the two top favorites right now, there might be upwards of 10 teams that have at least some existing chance to really win the thing.

All that said, Orange is now in the perfect position to make a run. They’re annihilating lesser competition, and nearly knocked off a Yorba Linda team that would be heavily favored against any and all D-10 competition. Orange not only almost beat them, but learned a lot about themselves in that game.

The Panthers have a versatile and balanced offense behind the core of Pedroza, Galvan, Andrade, and two more rushing threats in Isac Adetoye and Jeremiah Rivera. As far as Division 10 goes, that’s one explosive bunch. Their offensive line isn’t huge but they are gritty.

Defensively, the story is similar. Orange isn’t huge, but they are fast, tough, and versatile.

Rivera, Dylan Moses, Jaydon Bonnafoux, Nathan Cook, and Christopher Quiroga form perhaps the best (and deepest) linebacking group in the division. Joe Aguilera heads a defensive line that is comfortable squaring off against larger foes. And Andrade, Isaiah Adetoye, and Bryan Fausto lead a speedy secondary through which almost nothing passes through.

Orange plays with both swag and unity, a deadly combination. And against Yorba Linda they showed that they can play with anybody.