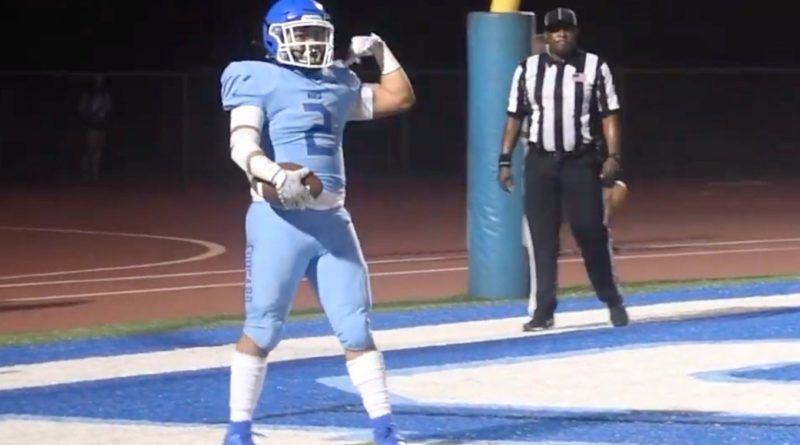 Fernando Chairez is having a tremendous senior season.

A senior running back and linebacker, Chairez has been at the center of an explosive Norco offense that is averaging 54 points per game. Through four games Chairez has 378 rushing yards and 10 total touchdowns.

Chairez had the game of his life in Norco’s 59-44 victory over Rancho Cucamonga on Sept. 6. He rushed for 138 yards and scored six touchdowns — five rushing and one receiving. His efforts landed him Scorebook Live Southern California football player of the week honors. He made our Top 5 Plays of the Week highlight video as well.

After that game, he was quick to give credit to star quarterback Shane Illingworth and Norco’s elite receiving corps.

“Rancho Cucamonga, they were dropping back. I have two great receivers, Division 1 receivers, Jaden Navarrette, and [Marquis Ashley]. So they were trying to double-cover them, do whatever they could to stop it, and I just played my part, and ran in through the holes,” Chairez said after the game.

Chairez took punishing hits by Rancho Cucamonga defenders throughout the game, bouncing off them, and rumbling forward. In a few instances, he even used the hits as launching boards to propel him further when he was on his way down.

Chairez — referred to by many of his teammates as “Nando” — came into this season as a linebacker by trade. Before the season, Norco’s star running back Jaydn Ott transferred to Bishop Gorman, leaving an opening in the backfield.

Chairez informed his coach that he had significant experience in previous years playing running back and slot, in addition to linebacker. At 5-foot-9 and 190 pounds with a strong frame, he has prototypical size for a running back. And because of his linebacking experience, he’s very engaged as a blocker when he doesn’t have the ball in his hands.

In last Friday’s victory over Redlands Valley East, Chairez scored four more touchdowns as the Cougars won 56-20. Three of his TDs were rushing, and he finished with 166 rushing yards on eight carries. He also added a receiving touchdown. Watch the highlights below: