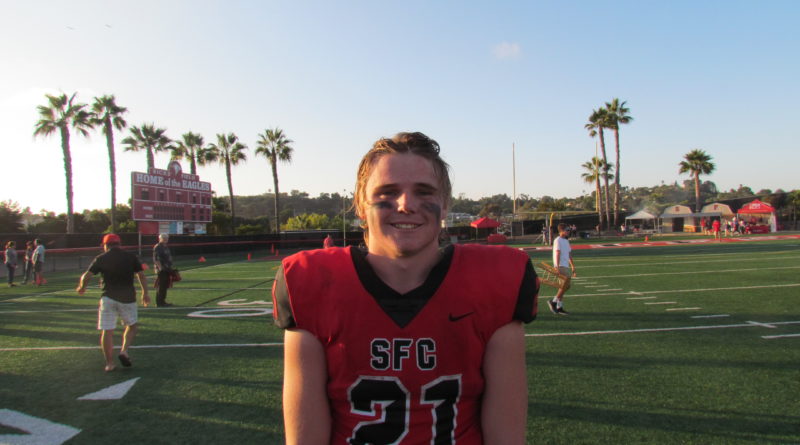 Stephen Britton; Dominated on the ground, rushing for 310 yards and 5 touchdowns.

Daniel Rosenberg; Seemingly open on every play, he racked up 13 catches for 148 yards and 2 touchdown receptions.

The Torrey’s had their offense in the red zone trailing by 16 late in the 3rd quarter. Quarterback EJ Kreutzmann rolled out to pass but couldn’t find an open receiver and was taken down for no gain, turning the ball back over to Santa Fe Christian.

“Our offensive line, our wings, and our wide receivers were blocking like nobody’s business, I couldn’t believe how open those gaps were,” Britton said after the game. His 5 touchdowns on the day were one more than he had coming in on the season.

Santa Fe Christian’s run-heavy offense was on display once again on Friday afternoon and clicking on all cylinders. The Eagles ran the ball 51 times for 504 yards and 6 touchdowns.

“The ground game was working, and we trusted in our line, the wings, and the receivers and we trusted that that was gonna work,” Britton said. “We’re conditioned. We do a lot of conditioning during the summer and during the year. So, when it’s that 3rd and 4th quarter, we just keep pounding.”

Their one pass attempt on the day went for 31 yards and a touchdown as Kian Hogan found Cade Ellis uncovered across the middle of the field.

The Eagles scored a touchdown on each of their possessions throughout the game with the exception of the final drive when they took a knee inside the 10-yard line to end the game.

Both teams’ offenses couldn’t be more different, but they align when it comes to punting. Over the course of the game there was not one punt attempted. The Torrey’s kept their offense on the field for every 4th down they faced while the Eagles offense allowed them to avoid any 4th down decisions.