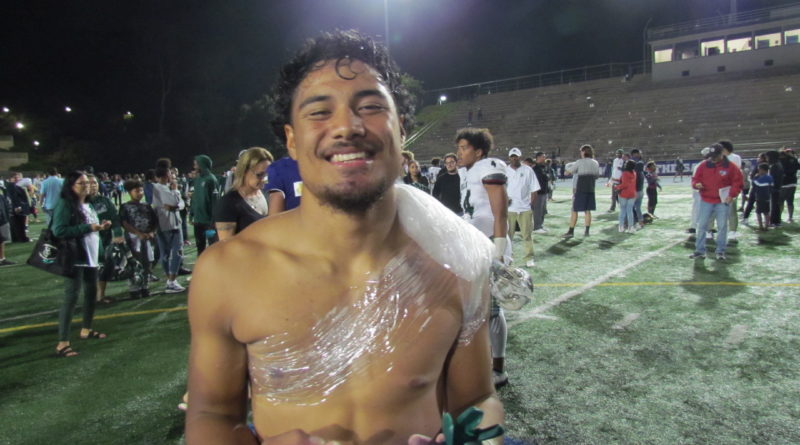 SAN DIEGO — Helix held off St. Augustine 44-38 Friday night in a matchup of the two top-ranked football teams in the San Diego Section. Here are five takeaways from the game:

Elelyon Noa: 30 carries for 270 yards and a touchdown.

Keionte Scott: His 2 catches both resulted in touchdowns.

Richard Colmenero: Went 17/25 for 288 yards and 2 touchdowns in relief of Angelo Peraza.

The Saints trailed 31-10 at halftime. They received the second-half kickoff but couldn’t grab it cleanly, giving possession right back to Helix. Elelyon Noa scored three plays later for the Highlanders, putting the game out of reach.

“Honestly it was just our o-line doing their job that we did the whole week for scheming, so just find the whole and execute,” Noa said.

Helix has sustained long success as one of San Diego’s premier programs, having finished under .500 only once since 1977.

“It’s just everyone. Everyone knows that Helix is a football school. It’s just a cool community, everywhere around Helix everyone is putting in work to help the team,” Jeremiah Fletcher said.

The Highlanders ground game was effective in this one, rushing for over 300 yards as a team.

“People are saying ‘you’re scared to run the ball against them’, we ran the ball effectively against them,” Helix Head Coach Robbie Owens said afterwards. “We’ve faced them three times so we kinda knew what to expect from them.”

Running back Elelyon Noa was his usual self for the Highlanders remaining extremely tough to bring down.

“It’s honestly the extra work after practice with the stumbling drill so that’s where it comes from,” Noa said.

“I’m just glad our guys came out and started fast in the 1st half,” Coach Owens said.

The Highlanders won the toss and elected to receive. They drove down into the red zone before missing a short field goal. The Saints responded by botching a handoff that was picked up by Jeremiah Fletcher and returned for a Helix touchdown.

“We’d seen it was a run, guard pulled, read my keys, worked downhill, seen the fumble, picked it up and all I thought was touchdown after that,” Fletcher said of his play.

After defeating Cathedral Catholic last week in a significant upset, Coach Owens’ message to his team was simple this week.

“We gotta go do it again. We felt like we were the underdog this week, so we came in like that win didn’t matter and we got the job done today,” Keionte Scott said.

The two biggest keys for the Highlanders this week?

“Definitely just making sure the quarterback doesn’t scramble and the running back doesn’t get around the edge,” Senior linebacker Jeremiah Fletcher said.

The Highlanders defense stepped up in a big way holding the Saints to 5 total rushing yards including holding junior running back Byron Cardwell to 0 yards on 9 carries. Helix will host Oaks Christian next week while the St. Augustine will travel to Morse.