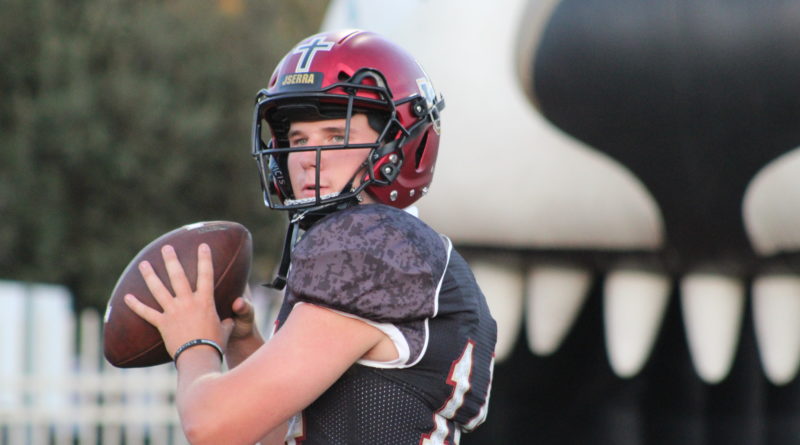 Here’s a look at how Scorebook Live’s Top 25 California high school football teams fared in games played Sept. 19-20. There are a handful of games on the schedule for Saturday night, including No. 2 St. John Bosco at Mililani (Hawaii).

The Monarchs get a week off to prepare for a trip to Washington D.C. to face St. John’s.

The Spartans held Buchanan to under 100 total yards of offense and quickly turned this into a rout by jumping out to a 35-0 lead before halftime. The entire second half was played with a running clock.

A week after scoring 59 points, the Diablos put up 63 against St. Mary’s — in the first half. Logan Schwenke and Lance Keneley were dominant on the defensive line as the Diablos totaled seven sacks.

The Dons bounced back from the Helix loss with a dominant performance against Eastlake.

The Huskies showed why they’re ranked in the Top 20 nationally, jumping out to a 44-13 halftime lead over a team that almost beat Serra last week. Centennial RB Nicholas Floyd had a big game with 11 carries for 156 yards and two TDs, plus a 74-yard TD reception.

JSerra quarterback General Booty bounced back with a steady performance after being pulled last week in the Lions’ 17-14 win over Milton (Georgia). He rushed for a 75-yard TD in the first quarter, threw a TD pass to Earnest McDaniel in the second quarter and didn’t turn the ball over all night.

The two best teams in the Sac-Joaquin Section put on a show Friday night, with the Bulldogs rallying for a 36-33 win. Folsom QB Jake Reithmeier threw the game-winning TD pass to Elijah Badger with just over 4 minutes left in the game.

The Saints fell behind 38-10 early in the third quarter, effectively putting the game out of reach. Helix shut down their running game, holding them to just five total rushing yards.

Grace Brethren’s explosive offense is averaging 45.3 points per game. They should be 8-0 heading into their Oct. 25 showdown with Sierra Canyon.

The Highlanders defense stepped up in a big way, holding St. Augustine’s running back Byron Cardwell to 0 yards on 9 carries. Elelyon Noa had another huge game for Helix, carrying the ball 30 times for 270 yards and a TD.

The much-anticipated Southern vs. City Section showdown lived up to the hype in front of a sold-out crowd at Narbonne. Jake Garcia threw three TD passes — one each to Eren East, Jack Brown, and Traeshon Holden — as the Gauchos did just enough to beat a very good Serra team.

LV Bunkley was outstanding for Serra in the loss, scoring on a pick-six and hauling in a TD pass from Doug Brumfield. He also made a number of highlight-reel receptions on the night.

Calabasas RB Jaylen Thompson was a bright spot in the loss, rushing for two scores, including this ridiculous 67-yard TD run.

The Sea Kings get to enjoy the bye week after dismantling Lakewood 56-7.

Noah Fifita threw for 404 yards and 6 touchdowns as Servite rolled to an easy win. Next up for the Friars: Notre Dame, St. John Bosco and Mater Dei in consecutive weeks.

Sierra Canyon survived a late rally by St. Paul as the Swordsmen scored twice in the final seven minutes to make it a game. Brendon Gamble had a receiving TD and rushing TD for the Trailblazers.

Sophomore QB Zach Siskowic rushed for two TDs and threw for one, and RB Sam Black had 89 yards and two TDs to lead the Knights to victory.

In a matchup of two of the best teams in Northern California last week, Liberty held its breath as Monte Vista’s potential game-tying 36-yard field goal attempt fell short with eight seconds left in the game.

The Highlanders snapped a two-game losing streak and should have a shot at running the table as their schedule gets much easier.

With 5-star running back Kendall Milton (quad injury) still sidelined, Buchanan couldn’t get anything going offensively against one of the best defenses in the country.

Justin Flowe and the Highlanders get a week off to prepare for Mission Viejo. Get your popcorn ready for that game.

Miller Moss and Floyd Chalk led the Warriors to victory Friday night. Now they get a week off to prepare for Bishop Amat.