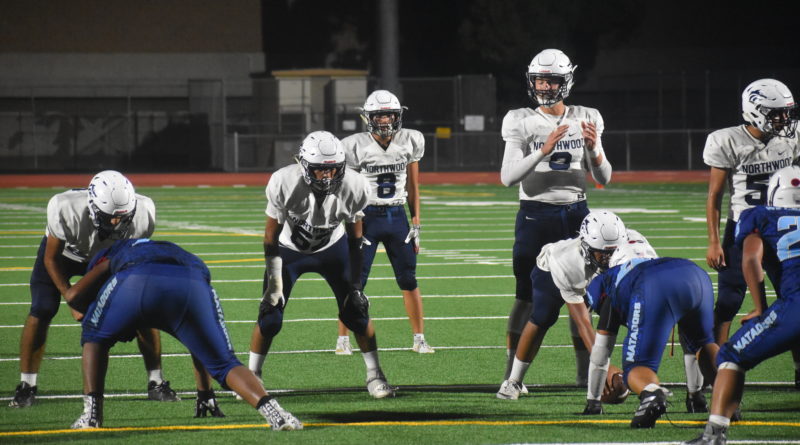 GARDEN GROVE– On Thursday night, Northwood got their third victory in four games this season, winning 40-0 over Bolsa Grande. It was a game they were expected to win, as Bolsa Grande is in Division 14. But they took care of business in every department nonetheless. Here are five takeaways from their victory.

YET ANOTHER SHUTOUT FOR NORTHWOOD

Northwood has played four games this season. Only one of their opponents have scored against them this season. Dana Hills, who came into this season substantially underrated, defeated them 35-28 in overtime three weeks ago and is currently 4-0 on the season. Northwood’s other three games have all been shutout victories.

On Thursday, Bolsa Grande didn’t even come that close to scoring. Northwood had to have recorded somewhere in the vicinity of a dozen sacks. Most of Bolsa Grande’s possessions were four-and-outs.

QB Jaden Piazza and WR Trey Littlejohn split Player of the Game honors after linking up for four touchdowns. Two-way lineman Xavier Cousar is right there with them. The Timberwolves were dominant at the line of scrimmage on both sides with him leading the charge. DE Travis Arena was also a key factor in tearing up Bolsa Grande’s offensive line. MLB Max Tait had a pick-six as well.

Phi Nguyen of the Matadors made a huge interception in Bolsa Grande’s end zone in the first half to help keep them in the game.

After three first-half touchdown passes from Piazza to Littlejohn, Northwood took a 19-0 lead into halftime. It didn’t seem like anything was going to change in the second half, but a second-half turnaround for Bolsa Grande was far from impossible.

The Timberwolves kept their feet on the gas, and Tait’s pick-six in the third quarter erased any remaining doubt.

While the score was lopsided, this was a physical game from start to finish. Bolsa Grande never stopped competing, and neither did Northwood. Both teams were able to avoid penalties or major incidents, but there was enough extracurricular activity to give an additional edge to the game’s excitement.

At one point late in the fourth quarter, the refs were tired of telling guys to move on once plays were over–“These are going to be the quietest two minutes of your entire lives,” one of them warned a group of players.

To be clear, combative energy is a part of the game and there was nothing dirty or excessive taking place on either side. But the oppositional energy was a noticeable part of the game.

THE TIMBERWOLVES GET MUCH NEEDED REST

Northwood only has 40 players, and nearly all of their top players either start or play rotation minutes on both sides of the ball. The fact that they were able to start pulling some of their key players out by the fourth quarter was huge. And backup quarterback Ethan Duong even ran for a touchdown as the last seconds expired to boot.

In order for Northwood to compete for a league/division title, both of which are quite possible, there is zero room for error as far as the wellbeing of their players’ goes. They can’t afford any injuries to rotation players or excessive progressive fatigue. Nights like this where they get their work done early will continue to be key going forward.