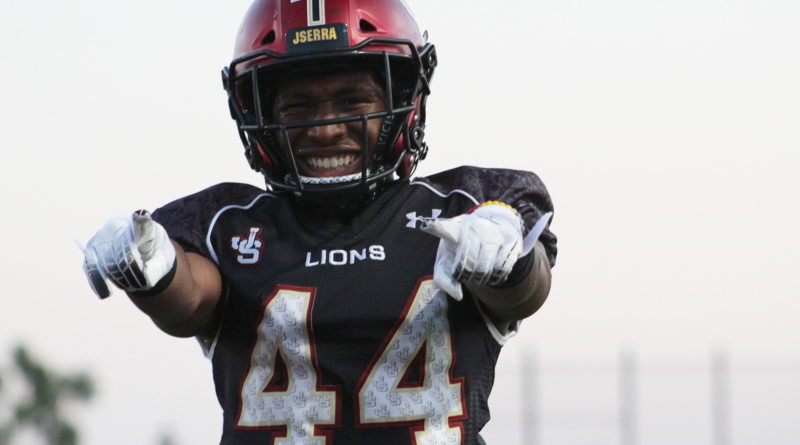 SAN JUAN CAPISTRANO — JSerra jumped out to a 24-0 first-half lead and went on to beat Calabasas 31-20 at home Friday night. JSerra moves to 4-1 with the win while Calabasas drops to 3-2. Here are five takeaways.

Earnest McDaniel impressed at receiver for JSerra. The junior caught a 60-yard pass and a 13-yard TD reception on the Lions’ fourth scoring drive.  He also made the catch of the night.

Running backs Sammy Green and Chris Street each rushed for touchdowns for JSerra and were tough to tackle all night. Green’s TD came from 31 yards out and made the score 17-0 in the second quarter. Street’s seven yard touchdown scamper put the Lions ahead 31-14 in the fourth quarter.

Defensively, the JSerra secondary did well to limit star Calabasas receivers Jermaine Burton and Johnny Wilson. Christian Laliberte had an interception in the game and Zamajay Duncan covered Burton and Larry Turner-Gooden effectively.

JSerra quarterback General Booty managed the game well after being pulled last week in the Lions’ 17-14 win over Milton (Georgia). He rushed for a 75-yard TD in the first quarter, threw a TD pass to McDaniel in the second quarter and didn’t turn the ball over all night.

“There’s always pressure on [General’s] shoulders,” McDaniel said. “He’s the quarterback, the leader of this team. He dusted that off and he came back strong.”

Describe the game in three words

JSerra led 24-0 at halftime, but a different Calabasas team came out for the second half. The Coyotes elected to onside kick the second half kickoff and they recovered. From there, Calabasas went on to score two straight touchdowns making the game 24-14.

If the Coyotes started the game the way they began the second half, this could have been a classic. In the end, Calabasas made too many mental mistakes to really give JSerra a game. A roughing the passer penalty early in the fourth quarter on General Booty pushed JSerra into the red zone. Street ran in for a 7-yard touchdown a few plays later to put the game out of reach for Calabasas at 31-14.

Jermiane Burton caught a touchdown pass, but it was a night to forget for both of of the Coyotes’ star wideouts. Burton and Johnny Wilson each dropped would-be touchdowns in the game and Wilson only had two first half receptions. That’s not going to cut it against such stiff competition.

The Lions’ coaches won’t be happy JSerra muffed two onside kicks Friday. The turnovers allowed Calabasas to get back into the game.