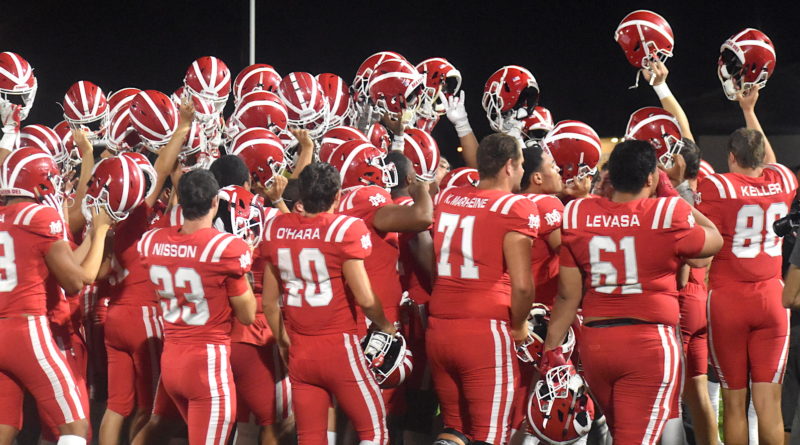 BELLFLOWER – Mater Dei, the top-ranked high school football team in the country, easily took out Maryland’s Saint Frances 34-18 on Saturday in Southern California. It was the third and final game of the Trinity League vs. USA Showcase, hosted by Mater Dei’s rival, St. John Bosco.

MATER DEI WILL BE TOUGH TO BEAT

Saint Frances came into the game as the consensus No. 2 team in the country, but they were no match for the Monarchs. Not that Saint Frances didn’t look like an elite team or that Mater Dei didn’t have to work hard for it, but the Monarchs took control early and the outcome was hardly ever in question.

So if Mater Dei beat the next best team in the country without any real question, are they unbeatable? No, but they’re close. Saint Frances will probably slide a touch in national rankings since this loss didn’t go down to the wire. Most likely, the next No. 2 team will be Mater Dei’s league rival, St. John Bosco.

St. John Bosco is in Mater Dei’s echelon, but for every win over national powerhouses that Mater Dei cruises to — which includes opening night over Corona Centennial and last week against Centennial (Arizona) — they become the favorites over the Braves. And there might not be any other teams in the country outside of Saint Frances and St. John Bosco that can beat Mater Dei one time out of every 10.

Five-star quarterback and USC commit Bryce Young stole the show with four rushing touchdowns. On top of his 104 rushing yards, he threw for 247.

Cody Epps led a nearly perfect performance by Mater Dei’s receivers. Quincy Craig and Cameron Leofa both ran the ball well for the Monarchs in limited opportunities too. Mater Dei’s offensive line as a whole was stellar all night against an elite Panthers defense.

Mater Dei’s defense was also stellar. Linebackers Dean Neeley and Jacobah Fuamatu were everywhere. The Monarchs’ went up against one of the biggest offensive lines in the country, and still kept the Panthers’ playmakers in check and applied edge pressure.

Offensively, RB Blake Corum was phenomenal for Saint Frances despite the loss. The Michigan commit finished with 181 yards and a 54-yard touchdown run. Osman Savage ran for their other two touchdowns.

Mater Dei took command of the game early on and never looked back. Halfway through the second quarter, Bryce Young ran for his third rushing touchdown to make it 21-6, and finished the half up 24-6.

Saint Frances would’ve needed their comeback effort to start immediately in the second half in order to have a chance. But not even two minutes into the third quarter, another rushing touchdown by Young made it 31-6. It was over at that point. And Mater Dei likely would’ve won by more had they not played conservatively down the stretch to avoid giving up quick breakaway touchdowns or pick-sixes.

At only 205 pounds, Mater Dei MLB Neeley had an outstanding performance and led the Monarchs’ impressive defensive effort against a much bigger Saint Frances team.

“That and it’s our preparation. We watch so much film, we practice so much on so much of their plays. Our head defensive coordinator, coach Eric Johnson, he’s a genius. He’s knows exactly what to do. We started running a brand new defense this week, and it was perfect.”

While Saint Frances lost, they did not give up or fall apart. They stuck together as a unit the entire game, kept their composure, and never stopped competing.

After the loss, coach Biff Poggi told his team, “I’m very proud of you guys. This one hurts, but you never gave up.” While they were bested by a superior opponent, their fortitude was commendable.