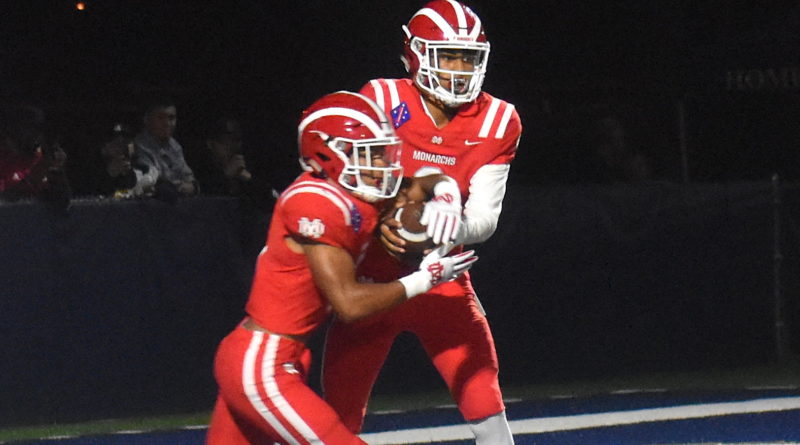 Saint Frances came into the game as the consensus No. 2 team in the country, but they were no match for the Monarchs. Bryce Young rushed for 104 yards and four touchdowns and threw for 247 yards as Mater Dei dominated in all phases.

DJ Uiagalelei threw for 293 yards and three touchdowns as the Braves beat their fourth consecutive out-of-state opponent. They head to Hawaii next week.

The Spartans dominated the matchup of the two best teams in Northern California, running their winning streak over NorCal teams to a mind-boggling 300 games.

A week after stunning Corona Centennial, the Dons were thoroughly beaten by an underrated Helix team.

Anthony Andrioli booted a 31-yard field goal with 2:22 left in the game as the Lions rallied for a 17-14 win over Milton in the Trinity League vs. USA Showcase on Saturday afternoon.

QB Jake Reithmeier was a bright spot in Folsom’s loss, throwing for 336 yards and three touchdowns.

After back-to-back so-so offensive performances, the Diablos exploded for 59 points in one of the most impressive Southern Section victories this week.

After easily dispatching Otay Ranch, the Saints have already turned their attention to next week’s showdown with Helix.

Grace Brethren’s explosive offense is averaging 45.3 points per game. They should be 8-0 heading into their Oct. 25 showdown with Sierra Canyon.

In one of the best games of the week, QB Doug Brumfield and Serra rallied from a fourth-quarter deficit to pull out the victory.

Narbonne QB Jake Garcia was dominant, throwing four touchdown passes in less than three quarters. In the first half alone, he was 17-for-21 for 269 yards.

The Coyotes bounced back from last week’s disappointing loss to Serra behind the play of quarterback Jaden Casey, who threw for 265 yards and six touchdowns in the win.

Better believe Miller Moss and unbeaten Alemany will jump into the Top 25 after this victory.

After losing to Oaks Christian last week, the Trailblazers focused on getting to the quarterback to try to get back on track. The plan worked. “After last week’s loss we’re a new team,” safety Cole Bullock said. “We came back with a lot more hype and a lot more pressure on defense; that was our goal all week.”

Ethan Garbers threw for 237 yards and four TDs as the Sea Kings raced out to a 49-0 halftime lead and never looked back.

Notre Dame WR/DB Sean Guyton caught a 40-yard touchdown pass and returned an interception for a score in the Knights’ win.

QB Jameson Silva completed 10-of-13 passes for 233 yards and four TDs as the Grizzlies cruised to their fourth straight win.

In a matchup of two of the best teams in Northern California, Liberty held its breath as Monte Vista’s potential game-tying 36-yard field goal attempt fell short with eight seconds left in the game.

Filling in for 5-star running back Kendall Milton (quad injury), Cade Uehling had a 73-yard TD scamper and a 75-yard TD reception to lead Buchanan past Liberty on Thursday night.

La Habra’s two losses are to Mission Viejo and Calabasas. It should get easier next week as they head to Diamond Ranch.

The Flowe brothers got it going in the third quarter, forcing four turnovers to turn a close game into a blowout.

RB Cooper Vander Hill did what he could for the Lancers, finishing with close to 100 rushing yards, but the Lancers never came close to sniffing the end zone.