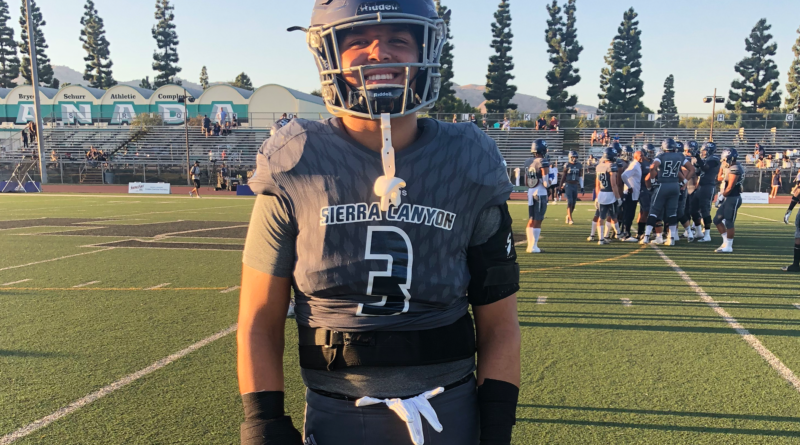 On the offensive side, sophomore Jason Jones rushed for 172 yards and a touchdown on just 12 carries. His fourth quarter TD scamper went for 74 yards.

Valencia WR/CB Jake Santos caught a 40-yard touchdown pass and broke up a third and goal throw in the end zone for the Vikings.

DESCRIBE THE GAME IN THREE WORDS

Lots of punts. The first four possessions of the game ended in punts. Both teams struggled to consistently move the ball throughout the night. It felt like a punt party, with a few noteworthy offensive and defensive plays mixed in.

In week two, Sierra Canyon lost to Oaks Christian 21-14. This week in practice, the Trailblazers focused on getting to the quarterback to try and get back on track. The plan worked.

“After last week’s loss we’re a new team,” Bullock said. “We came back with a lot more hype and a lot more pressure on defense, that was our goal all week.”

“We’re still putting together our final product, our best version of ourself,” he said. The kids played really hard. I thought we played great defense.”

Sierra Canyon ran the ball effectively Saturday, but struggled in the passing game. Starter Chayden Peery completed just 50% of his throws in the first half. Back up Amari Powell replaced Peery in the second quarter and threw an interception on his first throw. The two rotated from there on out.

Neither quarterback lit it up, but Ellinghouse maintains he used both signal-callers in an effort to have two capable varsity QB’s down the line, not because of poor performance.

“The decisions with the quarterbacks is not because someone is doing something bad or wrong, Ellinghouse said. “I just feel in this day in age that I want two quarterbacks that are prepared to play. Every game we have rotated our quarterbacks. We’ll see if we continue to do that.”

Jones’ run put the game well out of reach. Valencia struggled to move the ball all night. An 18-point deficit at that point in the game was too much to overcome.