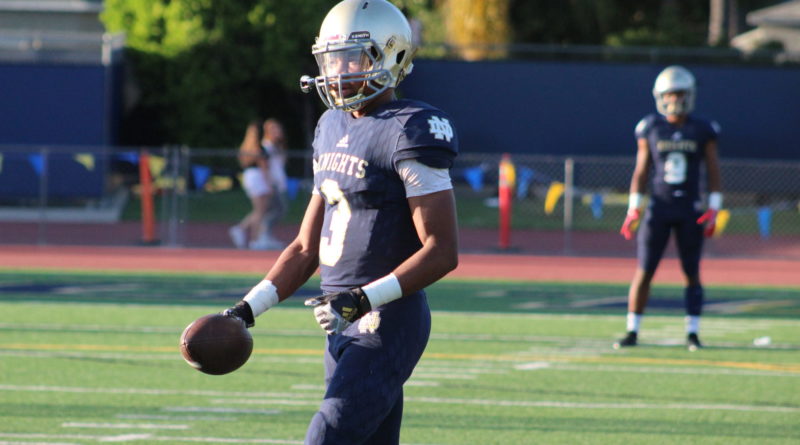 Notre Dame receiver and defensive back Sean Guyton caught a 40-yard touchdown pass and returned an interception for a score in the Knights’ win. Notre Dame running back Anthony Spearman broke tackle after tackle on a 43-yard touchdown run in the first quarter.

Notre Dame head coach Kevin Rooney was critical of his team’s offensive performance after the victory. A week after blanking Moorpark 42-0, the Knights weren’t sharp.

“Offensively, we didn’t play well…We have to get better.”

Sophomore quarterback Zach Siskowic threw two interceptions and the Knights coughed the ball up twice on fumbles. Notre Dame lost the turnover battle four to two, but won the game. That’s a rarity.

DESCRIBE THE GAME IN ONE WORD

DEFENSE A BRIGHT SPOT FOR BOTH TEAMS

Guyton had the flashiest play on defense for Notre Dame, but linebacker Jacob Moore and defensive end Adrien Aguirre made tackle after tackle. Both players had sacks.

Trailing 22-7 with 2:15 to play, Paraclete had fourth and goal from the Notre Dame six and Montes overthrew his receiver. The defeat moves Paraclete to 2-2. Notre Dame remains undefeated at 3-0.