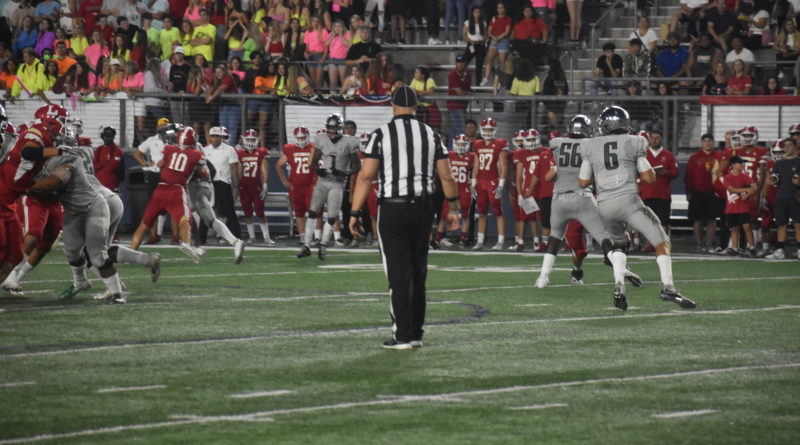 COSTA MESA– Narbonne left no room for doubt in Friday night’s 38-0 domination of Orange Lutheran. They got off to an early start, and never looked back. Here are five takeaways from the game.

Two weeks ago from Saturday, Narbonne suffered a surprisingly thorough pounding at the hands of Utah’s Lone Peak. The score was 41-21, but it felt even worse than that. It wasn’t just a disappointing game–it was demoralizing. Players were arguing and yelling at each other. A couple guys were even crying. The coaches were flabbergasted. It just wasn’t a good scene.

Since then, the Gauchos have showed their resilience admirably. They bounced back last week to defeat St. Paul 56-19. Orange Lutheran is on another level from both teams that Narbonne had beaten this season, and Narbonne put up their biggest margin of victory of the season yet. And it could’ve been a lot more lopsided had they not eased up a bit, for instance pulling star QB Jake Garcia before the end of the third quarter.

And the vibe of the team was the polar opposite from two weeks ago. The celebrations and dapping up between both teammates and coaches were contagious. Their mojo is back, and revved all the way up. While they still can improve, Narbonne is officially springing into midseason form.

Jake Garcia was dominant, throwing four touchdown passes in less than three quarters. He was 17-21 with 269 passing yards in the first half alone, and tacked on more touchdowns and yardage in Narbonne’s big third quarter as well.

The Gauchos’ defense was stifling as well. The interior did its job and then some, but the secondary stood out in particular. Jordan Banks, Alonso Person, and Craig Martin all had interceptions in the third quarter that took the last gasps of wind out of Orange Lutheran’s sails.

Cooper Vander Hill did what he could for the Lancers, finishing with roughly 100 rushing yards. But Orange Lutheran hardly even got close to scoring.

Narbonne jumped out to a 21-0 lead by early in the second quarter. The way their defense was playing, it didn’t seem like they were going to allow any close calls. By the time four minutes in the second half had gone by, it was 38-0.

“I believe I have the best receiving corps in the country,” Garcia told Scorebook Live.

He’s a 5-star recruit for a reason–his timing, decision-making, and accuracy project him as a strong NFL prospect down the road. He can make just about any wide receiver out there look like a star. But he went out of his way to share the credit with what really is one of the better groups of receivers in the country when everything is clicking.

NARBONNE STILL HAS ROOM FOR IMPROVEMENT

Narbonne was essentially unstoppable tonight, but they might be even better in a couple weeks time. Holden missed time and is still re-assimilating. Kobe Stewart has been out as well. And they’re still working on cutting down on the excess of penalties that has plagued them at times throughout this season.

“We just need to play like this every single week,” said Garcia. “We really got humbled [by Lone Peak], and I think we needed it. It brought us back to reality that we can’t just come out and play on Fridays, we have to work hard throughout the whole week. And we did that this week.”

“I like the way that we’re improving. And we’re just scratching the surface.”