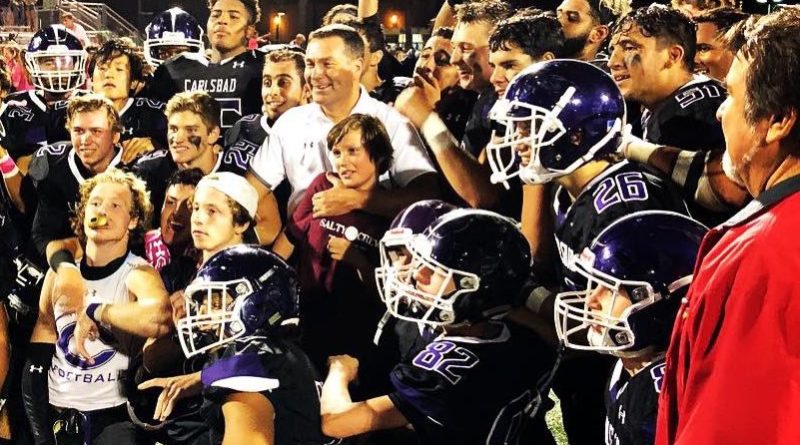 The Dons and Highlanders will get together for the 14th time in what has become one of San Diego’s best rivalries. Cathedral is coming off of two national level wins and has secured their spot as a top five team in California. Helix is coming off of an overtime loss to Herriman, Utah two weeks ago and had last week’s bye to prepare for Cathedral. Elelyon Noa will need to keep up his impressive rushing totals so far to keep the Highlanders with the Dons.

Mission Hills comes into this game having won six straight contests against the Lancers in this series. Both teams challenged themselves early on in the year and have emerged from early season games with identical 2-1 records with the one loss coming against Southern Section opponents. Carlsbad is tough to beat at home with their student section, The Loud Crowd, always bringing the noise and excitement to the sidelines.

The Norsemen and Lancers, both undefeated to-date, will face off for the first time since 1990. Valhalla’s rushing attack is led by Kegan Baker who is off to a huge start, with 468 rushing yards and 8 touchdowns thru the first two games. The Lancers offense has been on fire so far with Javin Deanda leading the pass game with 9 touchdowns and Jeremiah Serrano leading the ground game with 8.9 yards per carry with 6 touchdowns. Marko Aki has 28 catches on the season with 7 of those going for touchdowns.

San Clemente’s run of four straight games against San Diego Section teams to start the season will finally come to an end after this week. The Hornets come in undefeated despite not playing their best football. Lincoln will need big offensive performances from Kenneth Stevenson, Keyshawn Smith, and Benjo O’Brien against a Tritons defense that was able to slow Oceanside, Torrey Pines, and La Costa Canyon in the first three weeks.

The Panthers and Tigers, two of the most run-heavy teams in San Diego, come in having thrown a combined 33 times over 5 games. It’s safe to say that the clock will be moving in this game on Friday. Morse’s 3-headed monster of Micheal Cunningham, Daniel Thornton, and Jaycob Hicks have combined for 9 touchdowns thru the first two games. Vista counters with David Flores and Desmond Taua who have combined for 775 yards and 10 touchdowns thru the Panthers first three games.