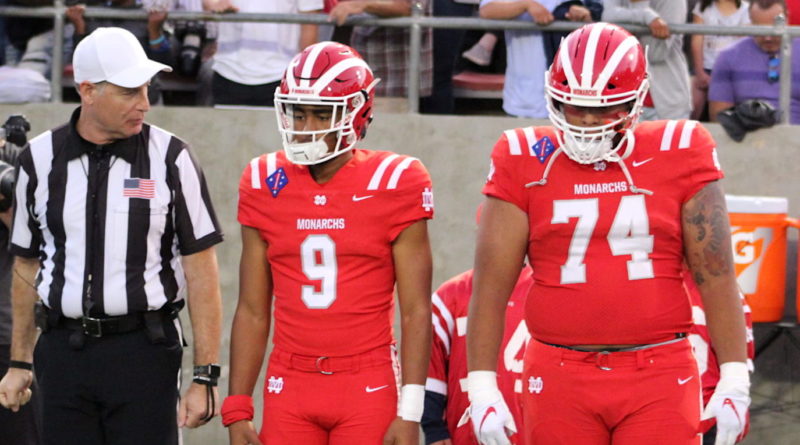 Last week featured one of the most exciting slates of California high school football games you’ll see all season.

Cathedral Catholic upset Corona Centennial in a nail-biter. Serra (Gardena) beat Calabasas on the road in double-overtime. Oaks Christian bounced back at home against Sierra Canyon. Norco and Rancho Cucamonga combined for over 100 points in an entertaining display of offensive fireworks. And the list goes on.

This week promises to be just as entertaining. What makes the Week 3 matchups particularly intriguing are the out-of-state showdowns that are garnering national attention. With the two best teams in the country squaring off in Southern California — plus a Top 25 showdown between Folsom and De La Salle — California will be the center of the high school football universe this weekend.

Valencia has been impressive so far this season. They’ve won their first two games by a combined score of 129-26.

Are they good enough to hang with Sierra Canyon? It’s tough to tell because the Trailblazers are way above the teams they’ve faced. If Sierra Canyon sleeps on them, they could find themselves in a hole really quickly.

After pulling out narrow victories the past two weeks, the defending 1-A state champions will be tested again against an unbeaten Monte Vista squad.

Mission Viejo is off to a great start to the season. Their first two wins against Konawaena (Hawaii) and Santa Margarita were solid. Then they completely shut down an explosive La Habra team 23-6 last week.

The Diablos will be heavy favorites hosting Villa Park, but this could be a real game. The Spartans are one of the best teams in Division 4 and they’ve already seen a team far better than Mission Viejo this season. If the Diablos sleep on them, they could be in for a surprise.

Just how good is Vista Murrieta? We are going to find out in a non-league game that could have major playoff ramifications.

Norco is always fun to watch with their array of offensive threats. When their defense is on point, they are extremely tough to beat.

Alemany is 3-0 after taking care of business against three inferior opponents. Meanwhile, Oaks Christian has already beaten Chaminade, had a tough loss against Grace Brethren, and bounced back to beat a very good Sierra Canyon team.

Alemany has the talent to hang with Oaks Christian, plus they have home-field advantage. They’ll have to play their best game of the season to have a chance though.

Narbonne has been hard to peg down this season. They’ve taken care of business against two solid foes in Buchanan and St. Paul. But their throttling by Lone Peak (Utah) at the California Classic was so off-putting that it’s hard to know exactly what to make of them. At the minimum, the Gauchos are still on a shortlist of the better teams in the country.

Orange Lutheran is off to a solid start as well having defeated very strong opponents in San Juan Hills and Edison. The pounding they took from Corona Centennial in their second game should serve as great experience as well.

If everything clicks for Narbonne, they likely have a slight edge. But Orange Lutheran, especially at home, has a great opportunity for one of their bigger statement wins in recent memory.

Don’t let the records fool you. Corona Centennial and Liberty are both top-five teams in their states. They have both played brutal schedules. And as much as the Huskies would hate to fall to 1-3, Liberty would really hate to fall to 0-4.

Calabasas and La Habra are both coming off tough losses. The Coyotes got stunned at home by Serra (Gardena) in double-overtime, and La Habra got shut down by a stingy Mission Viejo defense.

This is a big game for both teams, but especially for Calabasas who has to turn around and travel to JSerra next week.

St. John Bosco’s out-of-state schedule continues with their fourth consecutive game against a non-California opponent. And next week they go to Hawaii.

This matchup of two nationally ranked teams promises to be electric. Folsom has revenge on its mind after getting shut out 14-0 at De La Salle last season. The Bulldogs have not lost a game since, and now they face the Spartans on their home field.

The two best teams in the country going at it before league starts. What could be better?

The national consensus is that Mater Dei, St. Frances, and St. John Bosco are the three best high school football teams in the country. Of course, St. John Bosco and Mater Dei have to go through each other to not only win state and division, but even their own league. No other team in the country could serve as a better barometer and more exciting matchup for Mater Dei than St. Frances.

St. Frances started the season with a 49-13 victory over Miami Central, a Top 20 team nationally, and is a combined 119-0 in their two games since. Now they’re tasked with slowing down Bryce Young, who is fresh off breaking Mater Dei’s all-time record for passing yards in a game with 528.