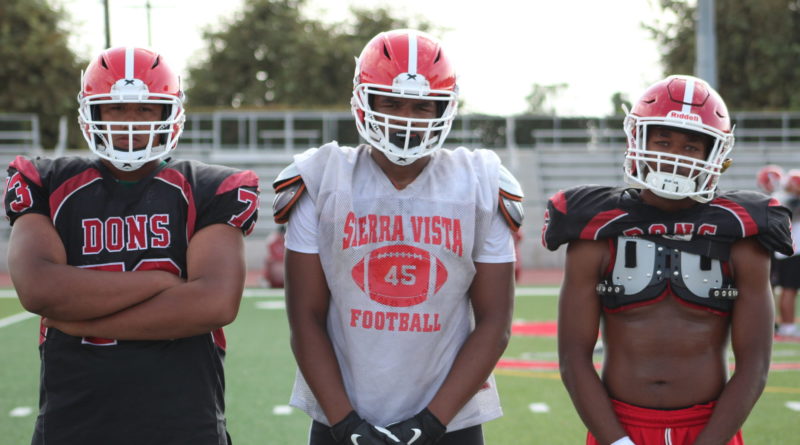 Fred Robledo has been covering San Gabriel Valley high school football for over 20 years. Until last week, he had never been to a Sierra Vista football game.

“There’s never been any real reason to go before,” Robledo said.

When Sierra Vista travels to play rival Baldwin Park on Friday, Robledo will cover the Dons for the second consecutive week. For the first time in decades and almost out of nowhere, Sierra Vista football is relevant again.

So what’s changed? It has everything to do with father-son co-head coaches Sergio and Matt Villasenor.

The duo began coaching at Sierra Vista in the spring and brought on an immediate culture change. In the two seasons prior to the Villasenor’s coming aboard, Sierra Vista went 1-19. The Dons are 2-0 in 2019 with wins over Gabrielino and Ganesha.

The team has forced its way onto the Southern California high school football radar not only because of their win/loss turnaround, but also because Sierra Vista players are actively getting recruited by Division 1 college football programs and the staff has bold plans for the future.

Since last spring over 30 Division 1 college football coaches have stopped by Sierra Vista’s campus. Matt Villasenor is the recruiting director for the local seven-on-seven football company Premium Sports. He does most of his work for them during the high school football offseason. Over the years, he has built relationships with college coaches from around the country through that gig. The coaches trust his word and it’s paying off for Sierra Vista players.

It sounds crazy, but there is legitimate interest from college football powerhouses for Sierra Vista athletes, a team in the 14th division of the Southern Section.

Junior defensive end Nick Dimitris has received scholarship offers from Auburn, LSU, Tennessee and other big time programs after coaches saw him play in the spring.

Junior lineman Anthony Rosas has received scholarship offers too. His most recent one came from Penn State.

And with all of that talk, come the doubters.

Some area coaches have questioned the legitimacy of the scholarship offers coming in for Sierra Vista players. And Matt Villasenor has taken heat on social media for trying to schedule the traditional top team in the San Gabriel Valley, Bishop Amat, next season.

“Matt has had some real boastful posts talking about how he wants to take on Bishop Amat next year, which would be absolutely crazy, but he’s throwing it out there,” Robledo said.

By his own admission, Matt Villasenor is a little cocky. He rubs some people the wrong way.

“There’s some animosity from coaches in the surrounding area who are used to the status quo that see this new team that does a lot of talking and they’re taken aback by it,” Robledo said.

Another issue arose when Sierra Vista had an opportunity to take a knee in its week one game against Ganesha. Late in the fourth quarter and up multiple scores, the Dons kept running their offense.

“Ganesha wasn’t complaining when they were beating down on us [in years past],” Matt Villasenor said Tuesday. “We beat down on them and now they complain.”

Matt Villasenor wants to make Sierra Vista an area power. Removing his audacity from the equation, he’s off to as strong of a start as possible when it comes to that goal.

He and his dad coach a high-flying offense that gets results. Against Ganesha, Sierra Vista back-up quarterback Allen Flores completed 19/26 passes for 386 yards and three scores in the Dons’ 50-29 victory.

What’s unique about this year’s team is that the first-year Sierra Vista coaches are winning games with players who were on last year’s 0-10 team or were at the school but didn’t come out for football. The Dons only have three transfers listed on the Southern Section website. They haven’t had a large number of kids check in. Senior receiver Nicholas Soares didn’t even come out for football a year ago, but is a key player on this year’s team.

Matt Villasenor gives his kids exposure and he understands what both current and prospective players want. Next year Sierra Vista will travel to Las Vegas for a game, and the team is also planning on having multiple uniform and helmet combinations.

“This is how you build programs,” Robledo said. “You don’t necessarily have to recruit to get transfers to come over, what you have to do is make yourself attractive and that’s what Sierra Vista is doing. … If you’re one of those players in a surrounding school that hasn’t done much, you may look at Sierra Vista and say you know what? I want to be there next year.”

The winner of Friday’s game between Baldwin Park and Sierra Vista will own community bragging rights. From a Sierra Vista perspective, it’s also important because a win for the Dons would likely mean a 10-0 regular season. On paper, this is the team’s toughest game.

The Villasenor’s have already done a lot to put Sierra Vista on the map. Imagine the boost the program would receive from an undefeated CIF championship run.