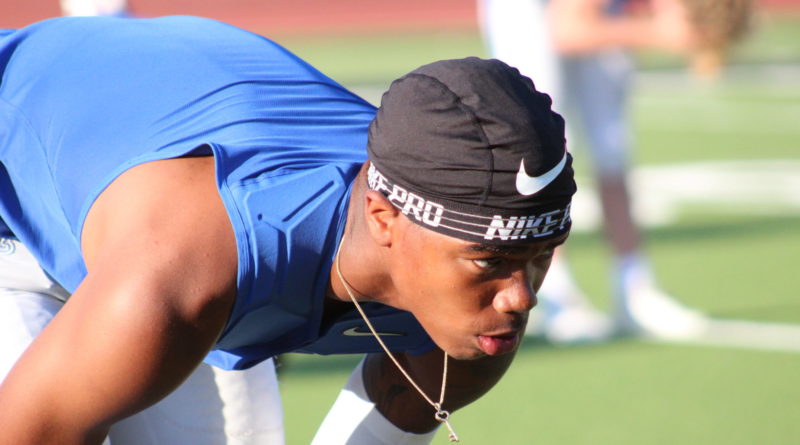 Every Monday, Scoreboook Live California reporter Connor Morrissette writes a column highlighting the top performers and the most intriguing storylines in Southern California high school football. You can find his column archive here.

There are two rules in high school football that need to be changed. Ball-carriers should be allowed to hurdle defenders and the unsportsmanlike conduct personal foul penalty needs a major overhaul.

Let’s start with hurdling. I understand why the rule is in place. It’s an effort to keep players safe. A hurdling player may land awkwardly on his back or neck and a hurdler could also potentially be dangerous for a defender. I get it.

In Friday’s game between Serra and Calabasas, Serra quarterback Doug Brumfield hurdled a Calabasas defender for a touchdown. By rule, the TD was called back because Brumfield leapt over the Calabasas player.

That should be a legal maneuver. It’s allowed in college and the pros. If leaping over players was that dangerous, then it would be outlawed at the higher levels.

I don’t think the rule is very effective either. Players know hurdling isn’t allowed, but still do it week in and week out. At one game I covered, one kick returner was penalized twice for the offense.

When a ball-carrier is pinned between the sideline and a defender, the only way to gain more yards is to either lower a shoulder and take on a hit or hop over the would-be tackler. It’s a natural reaction, a football play. Football plays should be legal.

Oftentimes hurdling results in a galvanized sideline. It pumps up teammates and fires up fans. It’s what makes football great. I hope it’s allowed in the near future.

Antonio Brown kicking a punter should definitely result in a 15-yard penalty. If that happened at the high school level, I’d feel the same way, but a clean hurdle like Brumfield had against Calabasas? That should be legal.

If you aren’t with me on hurdling, here’s something we can all agree on. There are too many 15-yard penalties in high school football following touchdown “celebrations.” I put celebrations in quotations because the players who score are penalized for just being happy. The flags are rarely warranted.

The smallest infraction results in a penalty and I think that’s wrong. Kids should be able to have a little fun.

The below video comes from Jerry Guardado. Narbonne linebacker Jordan Banks scooped up a St. Paul fumble and returned it for a score. The high five drew an unsportsmanlike conduct penalty. What are we doing here?

This next one is worse. It comes from Alex Scarr of LA Varsity and the Daily News. In week one, Crespi’s Blake Adams threw a 10-yard strike to Chance Tucker for a touchdown and then for some reason a flag comes out.

My final example comes from last season when Sierra Canyon played Calabasas. Sierra Canyon running back Hunter Ballard scored a touchdown and his two-second shoulder shimmy brought out a yellow hanky. What a joke.

Humility is important and a great trait that high school coaches can teach players. Were any of these “celebrations” over the top? No way. Officials will say they’re just doing their job, but these calls are ridiculous. It’s time for referees to be a little more lenient after touchdowns. Let the boys play!

What else can I say about Bryce Young? The kid is a machine. In Mater Dei’s 71-21 win over Arizona Centennial, Young threw for 528 yards and a school record-tying seven touchdowns in just three quarters. It looks like he’s ready for Pac-12 football at USC.

A note on the Trojans’ quarterback situation

Saturday night, true freshman Kedon Slovis made his first career start for the Trojans and led USC to a 45-20 win over then #23 Stanford. Slovis completed 28 of 33 passes for 377 yards and three scores. He looked like the real deal.

A lot can happen in a year, but 365 days from now USC will have Daniels coming back from his injury as a red shirt sophomore, Slovis beginning his sophomore year and Young as a true freshman. All of a sudden there’s a log jam at the QB spot. It will be fascinating to watch how all of this unfolds…

How did Franklin wideout Christopher Quijada make this catch? The Panthers went on to lose 37-7 to San Fernando, but what a grab!

Michigan running back and Oaks Christian grad Zach Charbonnet rushed for 100 yards and three touchdowns in Michigan’s 24-21 overtime win over Army Saturday. He’s been one of the lone bright spots for the Wolverines so far this season.