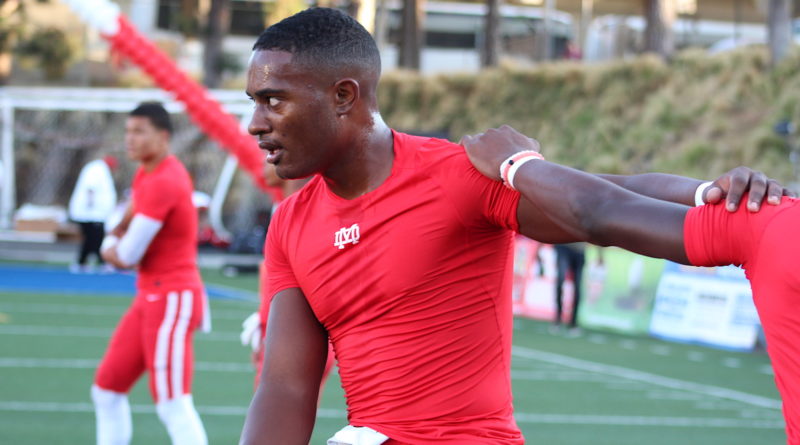 Below are the Top 10 athletes. For this list, we did not include players who made our rankings for other positions. We also focused on players who play multiple positions and excel on special teams.

Johnson transferred to Muir from Northview this offseason and will miss the first five games of 2019 as a result. A year ago as a sophomore, he caught 35 passes for 539 yards and nine touchdowns. Defensively he made 36 tackles and had an interception. Oregon, Florida, USC and a handful of other schools have offered Johnson a scholarship.

Bullock intercepted six passes as a sophomore. This offseason he’s played on both sides of the ball for Muir in seven-on-seven and has dominated defensive backs as a receiver. Bullock didn’t play too much wide-out as a sophomore, but should get more opportunities in 2019.

Avinger played both receiver and cornerback for Servite as a sophomore. Look for him to do the same as a junior. He holds a scholarship offer from Oregon.

Ware-Hudson is a menace. He plays receiver at Mater Dei and caught a touchdown from Bryce Young in the Monarch’s 42-12 opening win against Corona Centennial this year. Ware-Hudson is an intriguing prospect because he could end up playing linebacker in college.

In addition to Wright’s duties at receiver and corner for the Cubs, the junior also returns kicks and punts. Wright has excelled as a sprinter on the Loyola track team as well competing in the 100-meter, 200-meter and 4X400-meter relay.

Torres’ goal is to get to 75 career touchdowns. He began 2019 with 53. The senior had 2,668 all purpose yards as a junior. He catches passes out of the backfield and returns kicks and punts too.

Alefosio did a little bit of everything for Villa Park in 2018. He rushed for six touchdowns, caught 28 passes for 427 yards and four scores, amassed 552 yards as a kick and punt returner — bringing back four for touchdowns — and intercepted three passes on defense. He returned all three INTs for touchdowns.

Hobert won MVP of the Seaview League a year ago following an incredible junior season. The Washington State commit caught 46 passes for 643 yards and nine touchdowns. He also intercepted four passes as a defensive back. Hobert played special teams too. The senior punted, kicked and returned punts and kicks for the Stallions. He returned two punts for touchdowns and brought back one kick for a score.

Get ready for an incredible stat line: 124 catches, 2,103 yards, 32 touchdowns, 34 total touchdowns, 87 tackles, and 8 interceptions. Those numbers are from Savage’s junior year. What will the Arizona State commit’s senior year look like?

Wallace transferred to Cathedral from Paramount for his senior season. Last year for the Pirates, Wallace caught 36 passes for 769 yards and 12 touchdowns. He rushed for two more scores and on defense made 33 tackles and recovered two fumbles.