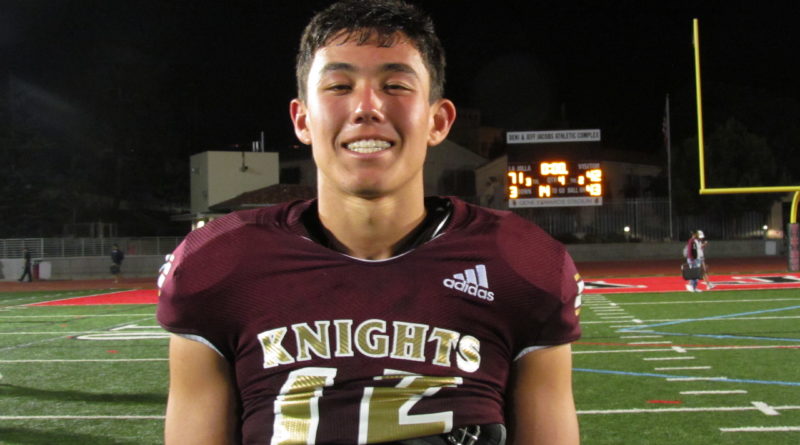 The Bishop’s Knights offense scored on 10 straight possessions to begin the game on its way to a 71-42 victory over Mater Dei Catholic in a San Diego Section football game Saturday night.

Tyler Buchner – The Notre Dame commit posted one of the best performances in San Diego history, throwing for 445 yards and rushing for 269 yards.

Clarence Freeman – The Davidson commit caught touchdown passes of 40 yards and 41 yards from Buchner while also starting at cornerback.

Armaan Banks – The Bishop’s running back got the scoring started with a first quarter touchdown run and caught two more touchdown passes in the first half.

When informed after the game of his nine touchdowns, Buchner was surprised.

Tyler Buchner connected with Armaan Banks on a 13-yard screen pass that resulted in a Knights touchdown, giving them a 20-0 lead late in the 1st quarter.

“The receivers played so well; the O-line balled up. I can’t wait for the rest of the season.” The Notre Dame commit said.

The Bishop’s offensive line protected Buchner all night and opened up several running lanes for him to get loose down the field.

Bishop’s offense was in peak form on Saturday night as they scored on every possession throughout the game until the last one when they took a knee during the running clock.

Buchner’s performance appeared to have a significant impact on his teammates during the game.

“Honestly it eases us up, because he’s running so much it opens up the pass. Clay, Chase, Griffin and I we just get open and make plays,” Freeman said. “It’s just fun, I’m going out there balling with my bros. Playing football is fun.”

Buchner’s sophomore season ended early when he tore his ACL on the first series of game number one. He’s back healthy now and even was able to shed his knee brace for the first time in week 3.

“Before I was very one dimensional, I had to stay in the pocket and chill out. But now it adds another dimension to the game, I can get out and go make a play,” Buchner said after the game.

Not being able to play last season was frustrating for Buchner but he found a way to make the most out of it.

“I think the big thing for me last year was I probably checked ten calls in the game tonight. I think that’s something I wouldn’t have been able to do last year. I just didn’t have that, so being able to see the field from a coach’s perspective really allowed me to see. Before every play I count the box, I do these things that I would never have known to do before.”

He’s now thrown for 10 touchdowns and run for 6 more through the Knights first three games.