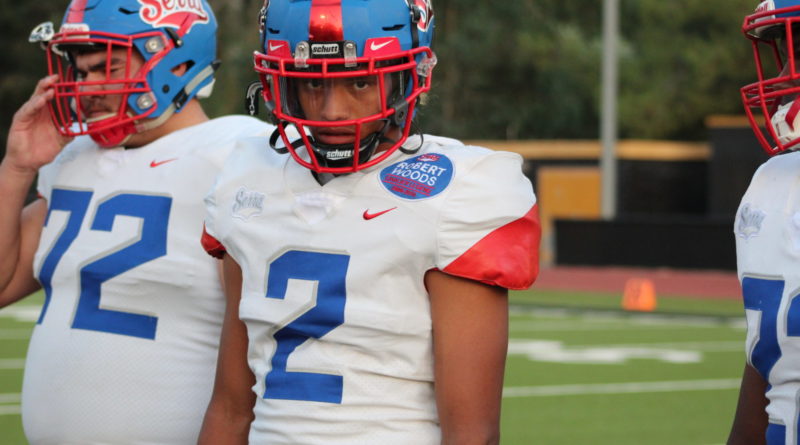 CALABASAS — In a game that was expected to be a shootout, No. 17 Serra gutted out a 26-20 double-overtime win over No. 6 Calabasas on Friday night.

“There was a six minute span when we just made every mistake possible,” said a tired, but chipper Scott Altenberg after Serra’s victory.

Serra’s head coach was right. In the third quarter, the Cavaliers turned the ball over and were consistently gashed for chunk plays by Calabasas’ star-studded offense. In the end though, Serra prevailed to earn a huge road victory. Here are five takeaways.

Serra senior quarterback Doug Brumfield finished with 159 yards passing and 128 yards rushing Friday. He was responsible for all three of Serra’s touchdowns. He ran for two and threw the game winner to LV Bunkley in double overtime.

Many expected this game to be a shootout. While Calabasas wide receiver Jermaine Burton did catch two touchdowns, Serra’s defense deserves credit for largely keeping Johnny Wilson in check and limiting Jaden Casey to a sub 50% completion percentage.

Linebacker Justin Houston and lineman Corey Martin stood out defensively for the Cavaliers.

For Calabasas, LeShaun Bell was dominant on the Coyotes d-line. I’ll have more on him later.

“I’m proud of my guys. This is huge for us as a team, to get this win. We had to get it. It’s exciting,” Altenberg said postgame.

This may sound like classic coach-speak from Altenberg, but he’s right about this being a huge win. Last year Serra went 5-6 and if this year’s playoff format was in place, the team would have missed the Division 1 playoffs by a mile.

The majority of area polls had Calabasas ahead of Serra this week. This was a big boy win for the Cavaliers, a win that will give them a boost when the time comes for Division 1 or 2 playoff placement.

Serra led by two scores at one point in the game before Calabasas rallied to tie it up at 20. Last year’s Cavaliers’ squad probably loses this game. This was a gutsy win from Serra, a win not too many people saw coming.

IT WAS OVER WHEN …

… Serra had 3rd and goal in the second overtime and Brumfield hit Bunkley for the winning TD.

Bell sacked Brumfield three times and was in the backfield all evening.

“He’s a great competitor honestly,” Brumfield said of Bell. “I had to keep my eye out for him every play. I just knew that he was going to be back there.”

Altenberg concurred with his QB.

SERRA VS. NARBONNE GETS MORE INTERESTING

Admittedly I’m looking ahead here, but Serra should beat Long Beach Poly next week and I think Narbonne has a great shot at beating Orange Lutheran following tonight’s 56-19 shellacking of St. Paul.

Narbonne hosts Serra on September 20th in their annual rivalry battle. This year’s game is looking like must see TV. Both teams have a chance to be undefeated against California competition heading into that one.