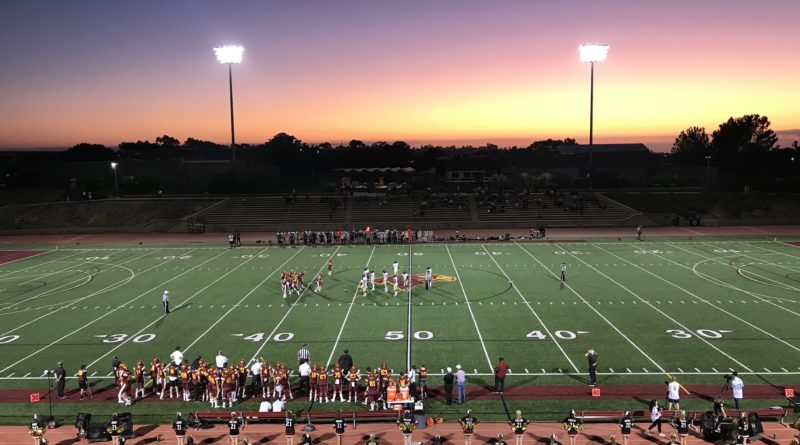 SAN DIEGO — Dorian Lewis scored on a nine-yard touchdown run with 9:59 left in the game and Torrey Pines held on for a 10-7 win over Olympian Friday night at Ed Burke Field. Here are five takeaways from the Game:

Marco Notarainni: His fourth quarter interception set the Falcons up to run out the clock.

Grant Anderson: Led the Falcons charge to stop the run all night and made a diving recovery on a third quarter fumble.

“It was a counter play, I saw that and was scraping over the top just to begin and I think it was (Tayden) Bultman who was getting in on the tackle, and I just saw the ball out and I was sprinting for that thing,” Anderson said of his third quarter play. “I saw it was going out of bounds, so I just jumped on it and luckily I did.”

Tayden Bultman: His varsity debut on Friday night included a second half interception and a big forced fumble.

Anthony Gilpin: His 4 catches and 51 receiving yards were the lone bright spot for the Eagles on offense.

“I mean we don’t feel pressure, but we know if the offense isn’t rolling to its full potential then we gotta make a lot of plays, keep their points down, get off the field and just keep giving our offense chances,” Senior middle lineback Grant Anderson said after the game.

The Torrey Pines defense stepped up and forced three 2nd half turnovers on a night when the offense couldn’t find a rhythm on the ground or through the air.

The Falcons fumbled a handoff, turning the ball over to Olympian on the Falcons 29-yard line. On the first play of the possession, Olympian’s Lukas Hamilton looked left to find star receiver Anthony Gilpin, but Marco Notarainni jumped in front and returned the ball down to the 12-yard line after a personal foul on Olympian during the return was tacked on.

“When I dropped back into my seam, I saw the two receivers were way too close to each other and the quarterback was looking over to my side,” Notarainni said. Their good player (Anthony Gilpin) was the number one receiver so I decided to push out to that and make a play on the ball.”

The offense exhibited by both teams won’t be on any upcoming teaching tapes. For Olympian, they were 8/21 passing for 92 yards, and ran the ball 21 times for 76 yards. The Falcons were 3/16 passing for 25 yards, but had relative success on the ground, rushing 45 times for 171 yards.

The upcoming schedules for both Torrey Pines and Olympian are sure to cause some challenges. The Eagles travel to Grossmont next week, Point Loma the week after, then return home for Oceanside before beginning Metro – Mesa League play. The Falcons travel to 3-0 San Pasqual next week before they dive into the Avocado League gauntlet.