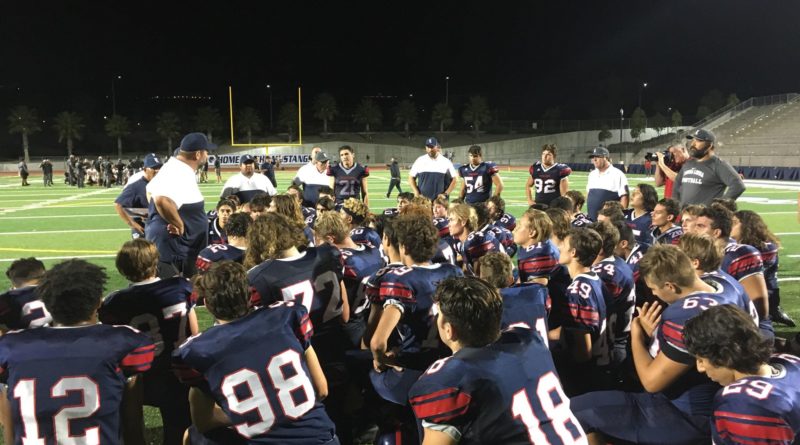 YORBA LINDA – In one of the Southern Section’s best games of the season so far, Yorba Linda defeated Orange 34-27 on Thursday night. Here are five takeaways from the double-overtime thriller.

A COMEBACK FOR THE AGES

While Orange couldn’t pull out the victory, their fourth quarter comeback to force overtime was unbelievable.

The game was nearly out of reach early in the fourth quarter until Daylen Pedroza completed a strong drive with a touchdown pass to Issac Galvan with 5:51 left. With the score 27-12, Orange went for an onside kick and recovered it. A furious drive capped off with another receiving touchdown by Galvan made it 27-19 in less than one minute. The Panthers recovered yet another onside kick, and within 30 seconds, Pedroza hit Galvan for a third straight touchdown. They followed it up with a two-point conversion.

In a minute and a half, the score had gone from 27-6 to 27-27. Nobody on the field nor in the stands could believe what was going on. Orange stopped Yorba Linda from scoring again, and even had a chance to win the game in regulation with 30 seconds left.

Neither team scored in the first overtime so it went to double overtime. Ultimately, Keaton Haddad made it 34-27 with a touchdown and Orange finally ran out of steam. But the comeback still left everyone in attendance in disbelief.

This game wasn’t over until it was officially over. The Panthers had the ball around the 22-yard line on fourth down with the chance to match Haddad’s touchdown. Yorba Linda loaded up in the end zone, and they couldn’t complete a pass.

Yorba Linda RB Keaton Haddad was dominant from start to finish. He had four rushing touchdowns, including the game winner, and roughly 200 hundred rushing yards.

While Haddad did most of the heavy lifting, Mustangs QB Gio Micallef had an efficient night. He rarely forced anything that wasn’t there and completed most of his passes. Micallef also had a touchdown pass in the second quarter to TE Carson Ochoa. Their offensive line played a major role in their victory as well, giving the playmakers room to operate.

For Orange, QB Daylen Pedroza and RB/WR Issac Galvan linked up for three passing touchdowns in the fourth quarter. WR/RB Andrew Andrade also had a touchdown in the first quarter for Orange off a pitch from Pedroza. It was unclear if it was ruled a receiving or rushing touchdown. Their touchdown drives were mostly led by sharp pocket passes and QB-keepers by Pedroza.

Orange’s special teams also deserve a ton of credit, specifically their kicking team. They pulled off back-to-back onside kicks in the fourth quarter to make the comeback possible. They also did a great job all night keeping Yorba Linda from doing any damage off kick/punt returns.

Defensively, Yorba Linda had an outstanding effort the whole night until they temporarily collapsed near the end. SS Luke Gigliotti in particular was everywhere, but the effort was all-around. CB Rhys Weingarten had a huge interception in the Mustangs’ end zone to end the first half.

As for Orange’s defense, they struggled to contain the run, but did clamp Yorba Linda down in the fourth quarter. OLB Dylan Moses had a strong showing.

“We let off the throttle, and we shouldn’t have, and we know what we did wrong,” Haddad told Scorebook Live after the game.

“Playing down to someone else’s level with a high lead is something we cannot do. We all know that, and I made my mistakes.”

When asked what mistakes he made, Haddad said, “Not seeing holes, being slow through holes when it’s right there, not trusting my linemen at certain moments.”

Yorba Linda players acknowledged in the huddle after the game that they needed to be better to avoid future collapses. Even Haddad, who seemed close to perfect all night, was quick to say so.

While the Panthers were quite deflated after the game after failing to complete the comeback, the coaches told them not to hang their heads. And they’re right – while Yorba Linda did “let off the throttle”, as Haddad put it, Orange’s comeback was more about them turning it on than Yorba Linda letting off.

Once they started handling the Mustangs’ solid pressure around the line of scrimmage, they put together an unbelievable fourth quarter. Their offense went from dead to unstoppable out of nowhere. Pedroza, Galvan, Andrade, and the offensive line all successfully turned up the jets against a great defense. The defense was great in the fourth quarter too. And the Panthers’ eye-opening prowess for onside kicks is apparently a force to behold.

Going forward, Orange will need to play the way they did at the end for the majority of games, not just small spurts. But if they can do that, they might even surprise themselves with that they’re capable of.