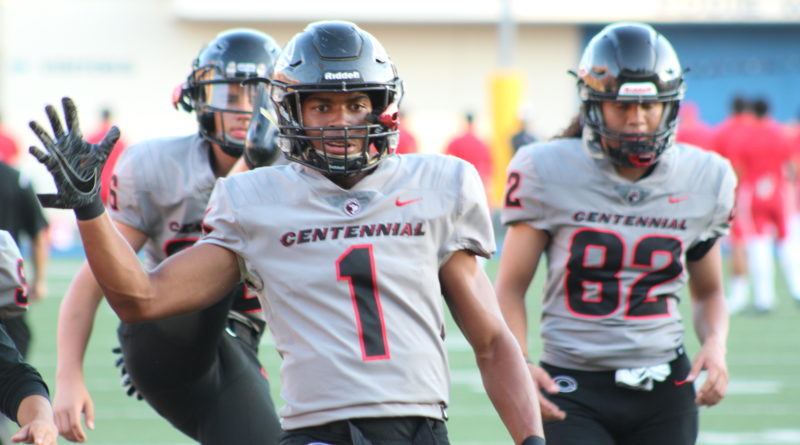 Here are our Top 10 football games to watch this week in the Southern Section and LA City Section. Note that every game is going to be played Friday at 7 p.m., except Servite vs. Bishop Gorman, which is Saturday at 8 p.m.

If Rancho Cucamonga vs. Norco barely cracks the top ten, you know it’s a heck of a week. Norco (1-0) is coming off a bye-week while Rancho Cucamonga is looking to bounce back after losing 45-26 to Calabasas. Norco is the favorite, especially at home, but Rancho Cucamonga easily has enough offensive firepower to upset them.

Mater Dei is arguably the most watchable team in the country, and there’s an off-chance Centennial can give them a run for their money.

Centennial’s first game, a 34-27 victory over Casteel, really could have been more convincing. The Coyotes not only won state last year, but went undefeated the entire season with not a single game being short of a blowout. Their only loss came to Washington champs Eastside Catholic in the GEICO State Champions Bowl Series.

Mission Viejo (2-0) defeated Santa Margarita 21-10 last week in a physical affair. But after their flat second half, coach Chad Johnson told them that a similar effort this week would get them “whooped” by La Habra. They know fully well that they’re up against their biggest test of the season so far.

La Habra is off to a great start as well. After a statement win over the Flowe brothers and Upland in week one, they dominated Redlands Valley East 56-7 last week. Expect a close one.

Speaking of Upland (1-1), they will have their hands full against an evenly-matched Rancho Verde squad this week. They bounced back from the loss to La Habra last week by pounding Crenshaw 48-0.

Rancho Verde is 2-0 but neither of their opponents so far have been in the same ballpark as Upland, or even close. That might work significantly to Upland’s advantage.

Paramount is a phenomenal football team, and might be the favorite to win Division 4. That said, Bishop Amat (2-0) would’ve loved to beat them by substantially more last week prior to meeting JSerra. Instead, Paramount took them to overtime, and was one 2-point conversion away from pulling off the upset.

JSerra is coming off a 24-13 loss to St. Joseph Regional from new Jersey, but there’s no shame in that–the Green Knights have a convincing argument as the best team in the whole northeastern part of the country.

By the way, if you like elite running backs who are committed to Cal, boy is this the game for you. Damien Moore (Amat) and Chris Street (JSerra) are two of the best around, and they’ll be going toe-to-toe. Street already has 276 rushing yards this season, and Moore had over 200 in the Lancers’ first game alone.

After a very narrow victory over Chaminade and a disappointing loss at home to Grace Brethren, Oaks Christian is probably not thrilled with their start to the season. Losing to Sierra Canyon at home this week would likely be demoralizing.

But after impressive victories over Westlake and Lawndale, Sierra Canyon is probably the favorite coming into this game. That said, Oaks Christian should be fully warmed up for them after the force they went up against last week.

Week one’s victory over Bakersfield left a lot to be desired for Calabasas, but now they’re rolling after beating Rancho Cucamonga by a margin. Serra is also undefeated–but they’ve only played one game this season, against Garfield. These two teams are both pretty evenly stacked across the board with talent, but Calabasas has the edge playing at home with Rancho Cucamonga under their belts.

On paper, St. John Bosco vs. a team that’s 0-2 doesn’t sound promising. But Liberty’s two losses were both competitive, and they came against arguably the best team in Arizona (Chandler) and in Hawaii (Mililani).

If those matchups served adequately to warm them up for arguably the best in the country in Bosco, this could be the most fun game to watch of the week. The Patriots (Nevada) have a superb defense, so DJ Uiagalelei and co. can’t afford to be caught napping.

Speaking of matchups between Trinity League teams and Nevada powerhouses, Bishop Gorman is hosting Servite on Saturday. They’re certainly the favorites, but Servite is one of the absolute best teams in California that isn’t a household name. Fundamentally sound and well-coached by Troy Thomas, the Friars are a threat to humiliate Gorman if they bring anything less than their A-game.

Centennial vs. Cathedral has the potential to be one of the best games of the season. Not only are both teams on a shortlist of the best in the country, but they are pretty evenly matched.

Corona Centennial (1-1) rebounded from their season-opening loss to Mater Dei by hammering Orange Lutheran 56-14 last Friday. Cathedral is 2-0 after defeating La Costa Canyon 42-9 and Saguaro, one of the best teams in Arizona, 18-10.