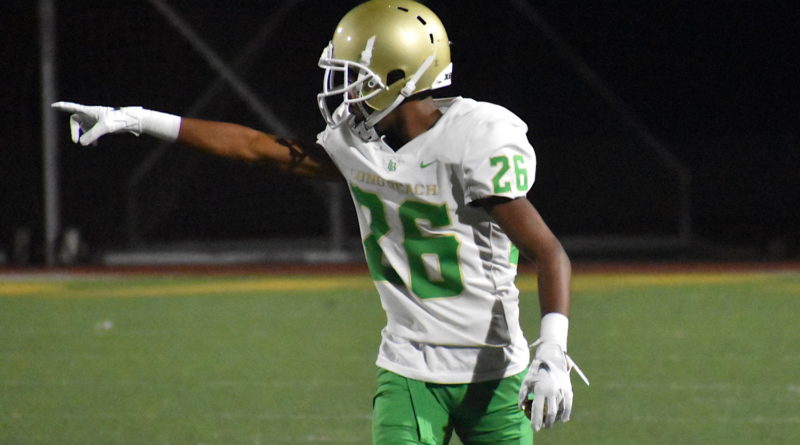 MOORPARK — On Saturday’s third and final matchup of day two of the California Classic, Punahou defeated Long Beach Poly 45-0. The game was played in neutral territory at Moorpark High School. Here are five takeaways from the game.

Punahou was utterly dominant against talented and athletic Long Beach Poly. In fact, they won the first half 38-0. While it’s very possible that Punahou is simply the better football team, part of the lopsided score can be attributed to differences in experience this season.

The Buff n’ Blue came into this game 4-0 (3-0 in league). Long Beach Poly, on the other hand, hadn’t played a football game in nearly a year. It showed from the get-go, as Punahou scored almost immediately after Poly botched the first snap of the game and fumbled the ball away.

There was never a point where it felt like Long Beach Poly was in the game. In addition to an outstanding Punahou team, they had to deal with rust and preseason jitters. Leading 3-0 halfway through the first quarter, the Buff n’ Blue blocked a punt and Isaac Maluina returned it for a touchdown. To say they never looked back from there would be an understatement. They were too crisp and were executing too well, and the Jackrabbits looked shell-shocked.

Not only did Punahou shut out Long Beach Poly, but also the manner in which they did it was eye-popping. They racked up an uncanny amount of massive (but clean) hits and tackles. They were the kind of hits that left plenty of Jackrabbits struggling to get up. And every single time, the assortment of screams and whoops from both the team and the crowd stood out as well. Clearly it’s an intimidating part of the Buff n’ Blue identity.

It’s very difficult to give top performer honors to anything less than Punahou’s entire team. Offense, defense, and special teams. Their execution was remarkable for a fairly young high school football team, especially in the first half.

The blocking from not only their offensive line but all 10 players without the ball was impressive. Numerous times, smaller skill position players delivered key blocks on the Jackrabbits’ large defensive line to make plays click.

RB/SB Vincent Terrell and WR/SB Koa Eldredge were both electric on offense. Terrell rushed all over the Jackrabbits, and returned a punt for a touchdown. Eldredge also racked up major yardage and a receiving touchdown.

Their defense was so dominant that it’s hard to single anybody out, but LB Legend Mautatia was everywhere. Not only on the defensive interior, but he returned a fumble for a touchdown as well. Jarrin Sato also had strong work at DB, which included an interception.

After giving up 38 points in the first half, Long Beach Poly held Punahou to seven points in the second half. In particular, their defensive interior and special teams units stepped it up after halftime. And while it’s merely a moral victory, they also had numerous drives from late in the second quarter onward that almost resulted in scores. Long Beach Poly wasn’t very effective Saturday night, but they showed character.