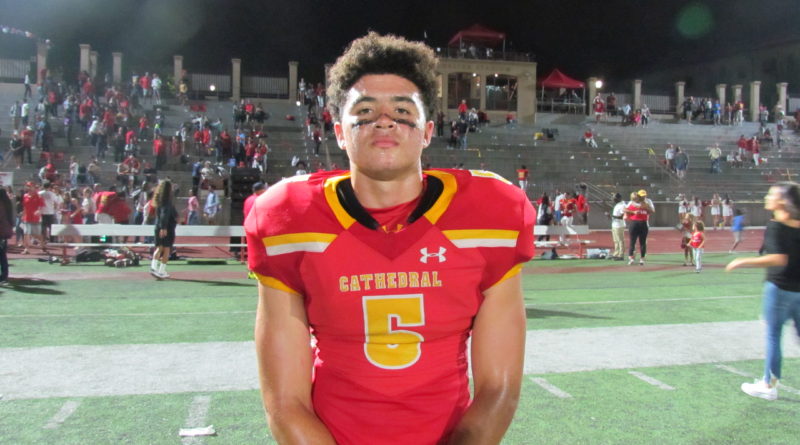 SAN DIEGO — Cathedral’s defense left Saguaro (Arizona) searching for answers throughout the game as the Dons came away with an 18-10 win Saturday.

“They were really physical; we just had to read our keys and play smart,” Allen said.

DJ Ralph— The Dons signal caller wasn’t asked to throw much, but he consistently navigated them across the field, while converting several 4th downs.

“It’s just that mindset, it’s that mindset that were not gonna lose, you know we just got some dogs on our team. They don’t wanna get stopped,” The 2nd year starter said postgame.

Zavien Watson— The Arizona Baseball commit ran hard all night, while scoring two of his three touchdowns on 4th down attempts.

“Last year was my first year in the Honor Bowl, and to be honest it’s one of the most fun games you can ever play in,” DJ Ralph said about the event. “I know I’ll remember these games for the rest of my life. It’s fun playing for a greater cause and on top of that playing some of the best teams in the nation.”

The Honor Bowl was held at Cathedral Catholic HS for the 3rd consecutive year.

Saguaro faced a 4th down and goal from the 4-yard line with 19 seconds remaining. Their Quarterback Tyler Beverett took the snap, rolled right, and fired into the end zone but his pass ended up on the turf, creating an immediate celebration from the Dons sideline.

“Outside contain, just get to the quarterback as soon as possible,” Allen said about the Dons getting their final stop of the night.

The Saguaro Sabercats entered The Honor Bowl as the 10th ranked team in the country according to USA Today. They have several Power Five Level commits as well as the nation’s top cornerback in Kelee Ringo.

With the exception of two deep completions, Saguaro struggled to get anything going as the Dons defense was consistently swarming throughout the night, while holding Saguaro to their lowest point total since October of 2011.

COMMITMENT TO THE RUN

Cathedral, known for their Wing-T attack didn’t differ from their normal attack on Saturday night.

“Our offensive line blocked the whole week, we were game planning for what they were gonna do against us, and it worked,” Watson said.

“We’ve been preaching all week, ‘who are we?’, I think we proved that we can dominate,” Ralph said. “That was our plan, just come out and pound it, just get yards every play, if we had adversity just keep fighting.” The Dons (2-0) will prepare to host Corona Centennial next week, while the Sabercats (1-1) will head to Las Vegas to play in the Polynesian Classic on Saturday.