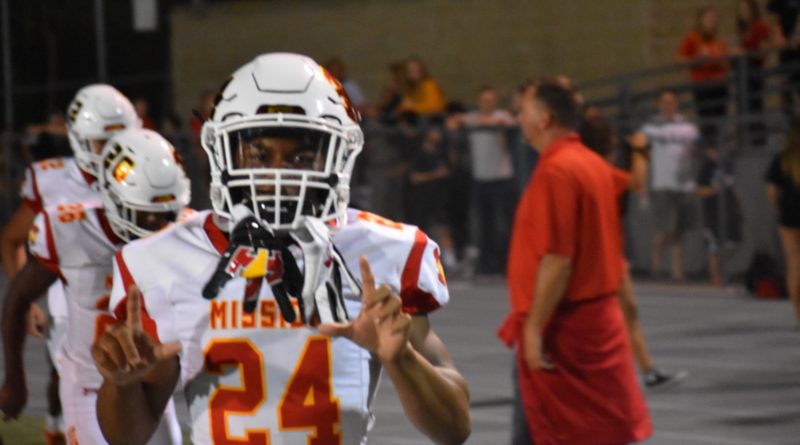 It was a charged atmosphere Friday night in Rancho Santa Margarita as the Eagles and their fans had plenty of motivation to beat visiting Mission Viejo. There are not one, not two, not three, but four key transfers on Mission Viejo’s football team that were Eagles last season.

The most notable transfer is star QB Peter Costelli. But DE Logan Schwenke, WR Chase Nenad, and OLB Brenndan Warady are all enormous losses for Santa Margarita. And enormous additions for Mission Viejo.

Santa Margarita fans were heckling them all night, including a sign from an Eagles fan even that called Nenad the devil.

“We basically took their core, and brought them to our team,” Mission Viejo RB Jacquez Robertson told Scorebook Live.

A TALE OF TWO HALVES

This game was a tale of two halves. Mission Viejo dominated the first half 21-0, which set the stage for their victory.

The Diablos were unstoppable on both sides of the ball early on. But what seemed like a blowout going into halftime actually was a game until close to the end. Santa Margarita came out with renewed defensive intensity in the third quarter and shut Mission Viejo out for the rest of the game.

The Eagles were visibly frustrated in the first half, and while they didn’t get the win, they left holding their heads high. In particular, CB Grant Maxwell’s fumble recovery touchdown and Tyler Hartigan’s interception that he nearly returned for a touchdown had the whole team and crowd hyped.

Mission Viejo’s second half performance was so underwhelming that coach Chad Johnson lit into his team after the game. Between their poor offensive intensity and numerous defensive penalties, he got on them for being “undisciplined.”

The bottom line: he told them that a similar effort next week will get them whooped by La Habra.

Mission Viejo RB Jacquez Robertson was the clear star of the night. He finished with a rushing touchdown and a receiving touchdown, and more than 150 total yards.

RB Tyson Scott was also superb for the Diablos, finishing with over 100 rushing yards and a rushing touchdown.

Costelli was the biggest name on either team offensively, so Santa Margarita tried to take away Mission Viejo’s passing game. As a result, Costelli didn’t force anything and largely kept the ball on the ground. He finished with 96 passing yards and a touchdown, completing 9 of 11 passes.

In the first half, Mission Viejo’s offensive line was outright dominant. They came out less aggressive in the second half but at that point the damage was done.

The Diablos’ defensive line, however, was dominant the whole game. Santa Margarita’s only two scores came on a fumble recovery touchdown and a field goal following a near pick-six. The Eagles’ offense couldn’t get anything going all night.

Keanu Kama and Mark Ard Jr. both had strong showings for the Eagles’ secondary despite the defeat.

With 11:29 left in the game, and Mission Viejo leading 21-7, Diablos safety Ryan Nichols picked off an errant pass. But Santa Margarita got the ball right back when DT Tyler Hartigan intercepted Costelli and ran it back deep into Diablos’ territory. His interception brought new life to the Eagles, but down 14 points, they really needed a touchdown. Instead, they had to settle for a field goal with 6:32 left. Down by two scores with little time left, that effectively ended the game.