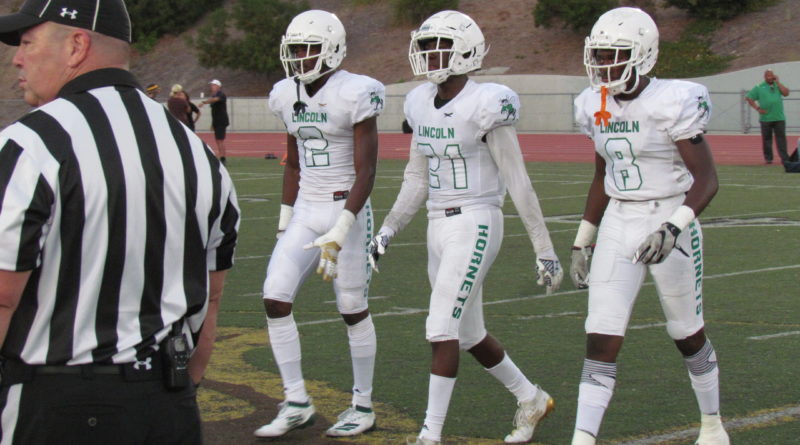 OCEANSIDE — El Camino’s comeback looked to be in its finishing stages on Friday night when a botched handoff changed everything. Here are five takeaways from Lincoln’s 26-24 win over El Camino (Oceanside) in our Game of the Week.

Zion Jackson—In a losing effort for the Wildcats, he rushed 30 times for 148 yards and a touchdown.

Jacob Gathright—His 4th quarter included a 25-yard touchdown reception and an interception for the Wildcats.

Marquese Allen-Patmon— Had a sack and a red zone interception while roaming all over the Hornets defense.

“I’m more of a balanced type player this year. I can cover and come in and tackle. I just play with my heart,” Allen-Patmon said of his game.

Curon Brown-Dunn—His fumble return gave the Hornets the lead for good, and his sack on the next possession sealed the game.

Keyshawn Smith— Scoring the first touchdown of the game, he reeled in a jump ball from Tyler Jensen at the 5-yard line and carried his defender with him into the end zone for the score.

“They tried to run on us, and it wasn’t working. Basically, most of the stuff that was working for them was basically off of luck. We’ll become better,” Allen-Patmon said.

The Wildcats were leading 24-20 and had just intercepted Lincoln and returned it to the 23-yard line giving them the chance to add on. A botched handoff bounced onto the turf and right into the hands of Hornets lineman Curon Brown-Dunn who sprinted 77 yards for a Lincoln touchdown, giving them the lead for good with 4:12 to play.

“It was amazing, I had to make something happen, get it and go,” Brown-Dunn said. “The last fumble I got I didn’t score so I had to make it up.”

The two teams combined for 28 penalties on the night, with Lincoln committing 19 of those.

“We just gotta come together as a team. More focus in practice, this week we had a bad practice,” Allen-Patmon said about his team. “When we pick the small stuff up, we’ll be better.”

Lincoln’s lack of a consistent kicking game forced their offense to go for it on 4th down three times within the zed zone, and they were unsuccessful each time.

“We all have ups and downs and stuff,” Brown-Dunn said. “We’re slowly coming together, and we’ll fix it throughout the season.”