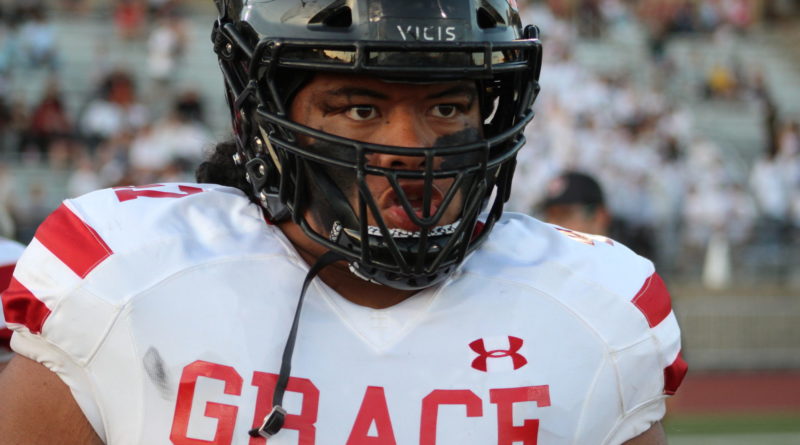 “The boys played their butts off,” he exclaimed.

After going into the locker room at halftime tied 28-28, Grace Brethren outscored Oaks Christian 26-0 in the second half to win 54-28. Here are five takeaways from Friday’s game.

Grace Brethren senior running back and linebacker Josh Henderson (he’s the coaches son) ran 76 yards for a touchdown on the Lancers’ first play from scrimmage. He ended the game with a sack of Oaks Christian quarterback Jameson Wang.

Henderson finished the night with 136 rushing yards and four touchdowns. He also intercepted a pass.

Grace Brethren won a state championship last season. Tonight, the Division 3 Lancers knocked off a team that was a Division 1 semifinalist a year ago. It’s a statement win for the program and Henderson is proud.

“From a program perspective, I couldn’t be more thankful for the direction we’re heading and how hard the kids are playing. It’s one thing to attract talent. It’s another thing to stick with your core values and you saw that tonight. That means a lot to me and a lot to the school.”

The second Grace Brethren running back Julien Stokes crossed the goal line on his six-yard touchdown run midway through the fourth quarter, Oaks Christian’s night was over.

That score put Grace up 47-28 and clinched one of the best wins in program history.

Oaks Christian routinely messed up their substitutions on Friday night. On one occasion, the Lions were called for an illegal substitution penalty and multiple times head coach Charles Collins had to take timeouts to get the right personnel on the field. The Lions have some new faces, but they were far too undisciplined. It didn’t look like 2018 Oaks Christian. Those issues should get better with time, but they are a concern.

The Lions were missing three top players in linebacker Ethan Calvert (suspension), receiver Bryce Farrell (ankle) and receiver Alonzo Fontenette (sit out period). That’s not an excuse for the loss, but these are three future Division 1 players who will help.

Oaks plays Sierra Canyon and Alemany next, two teams on the rise. While, no one should be hitting the panic button yet, a 1-3 start would be troubling for a program that lost just one game a season ago.

A POSITIVE FOR OAKS CHRISTIAN

Collins is high on quarterback Jameson Wang and it’s easy to see why. The Harvard-Westlake transfer rushed for two touchdowns and threw two more in the first half Friday night. He makes a lot of plays.

Wang threw an interception in the second half and was tested for a concussion after slamming his head against the turf at the end of a scramble play. He ended up returning later in the game.

There were ugly moments in the third and fourth quarters, but Wang’s first half performance definitely provided something to build on.