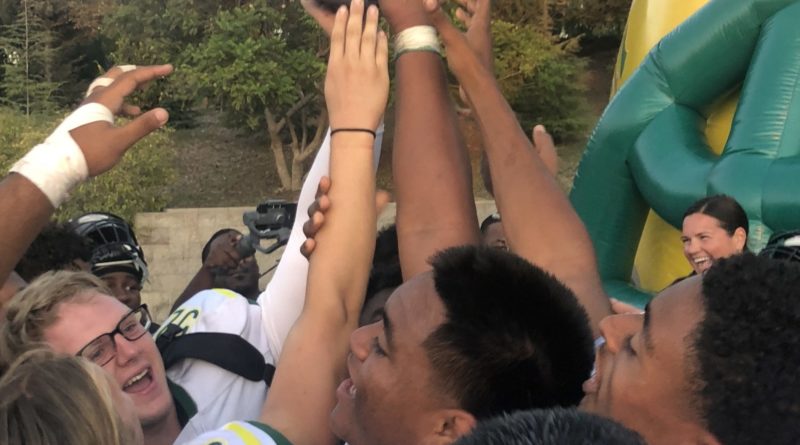 Cajon took down Cathedral 26-14 Saturday at Moorpark High. The Cowboys did not allow a point in the second half to improve to 1-1. Cathedral fell to 1-1. Here are five takeaways.

Cajon’s defense had a great afternoon. Rodney Robinson and Kamron Forest anchored a secondary that allowed a few chunk plays to Cathedral’s high powered passing attack, but never really broke down, especially in the second half.

On the offensive side, Patrick Ragan threw three scores and Freddy Fletcher rushed for a touchdown.

Robinson was really happy with his secondary’s improvement this week after their 28-22 week zero defeat to Helix.

“We came out with a different mindset this week because we gave up a few big plays last week so this week we wanted to prove that we’re one of the top secondaries in the Inland Empire,” the senior said.

In the fourth quarter, a Cajon punt nicked the leg of Cathedral’s Kain Sanchez after taking a funky bounce and the Cowboys recovered. Cathedral was down two scores at that point and had some momentum, but gave it right back. They never recovered/ran out of time after that miscue.

ROGERS LIKES WHAT HE SEES FROM HIS HIS QB

Cajon fans saw last year’s quarterback Jayden Daniels start under center for Arizona State in their opener on Thursday. Patrick Ragan has taken over for Daniels and he put on a solid performance Saturday, which Rogers enjoyed.

“He picked his spots and made some good throws for us, but our offensive line did a helluva job up front and our running backs ran hard too,” Cajon’s head coach said.

The Phantoms had a lost fumble in the red zone and QB Lucas Lenhoff threw two picks. They’ll look to take better care of the football next week against Carson.

Cajon takes on Heritage on the road in their next game.