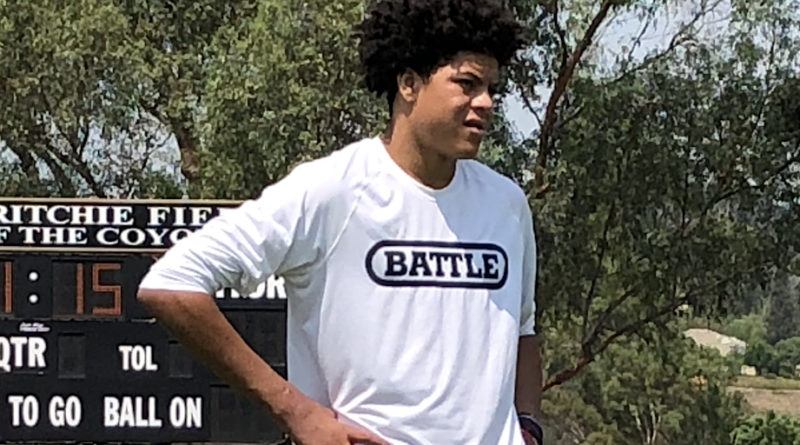 These are preseason rankings based on last year’s performance and spring and summer observations. We will update the rankings at midseason. Southern California is stacked with elite wide receivers, so these were not easy decisions.

Hutson caught 46 passes for 844 yards and 13 touchdowns a season ago. He also returned two kickoffs for scores. He had five catches for 139 yards and a TD in St. John Bosco’s season-opening win. Hutson is committed to Oregon.

Johnson Jr., who transferred from Venice, racked up over 1,000 receiving yards last season. His dad, Chad (Ochocinco) Johnson, played for Oregon State and made six Pro Bowls in an 11-year NFL career. Johnson Jr. has committed to Arizona State.

As a sophomore last season at Diamond Ranch, Dixon caught 43 passes for 862 yards and 11 touchdowns. Now at Mater Dei, he’ll have the chance to be the Monarchs’ top pass-catcher in 2019. Dixon joins a receiving corps that also features Kody Epps, CJ Williams and Kyron Ware-Hudson.

Collins is 247’s second-ranked WR in the entire country in his class. He’s expected to have a more featured role this season for Bosco after a great offseason. Collins already has at least 26 offers.

LV Bunkley-Shelton, a 4-star recruit, currently has 22 offers, including Ohio State, Texas, Washington, and USC. He’s yet another member of this list on the 1,000-yards receiving club, and a standout at DB as well.

Loya, who transferred to St. John Bosco after catching 73 passes for 1,057 yards and 11 touchdowns at Orange Lutheran last season, is currently sitting on 13 D-1 offers. He had 9 catches for 162 yards in Bosco’s season-opening win.

A top-65 recruit in the country per 247, Bryant recorded 905 receiving yards and 11 touchdowns last season. He’s also a contributor as a punt returner for special teams and at DB.

Calabasas has arguably the best WR duo in the country. Along with Johnny Wilson, LSU-commit Jermaine Burton is the other half of it. He led the Coyotes with 863 receiving yards and 14 touchdowns last season.

The 6-foot-5-inch, 205-pound Stanford-commit had about as crazy of a stat line last season as you see from Division 1/2 WRs. As a junior, Humphreys was good for 1,783 receiving yards and 28 touchdowns on 103 receptions.

Wilson had an injury-plagued junior year at Calabasas, but still caught 40 passes for 672 yards and 10 touchdowns. That was when he was listed at 6-4, 190. This year he looks closer to 6-6, and is even stronger. He’s regarded as one of the nation’s top prospects regardless of position. Wilson is committed to Oregon.