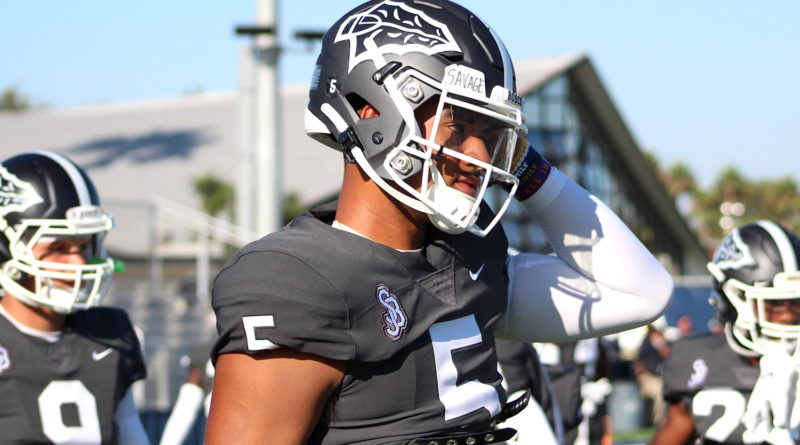 Here’s a look at the Top 10 Quarterbacks:

Uiagalelei threw for 3,366 yards and 48 touchdowns last season as a junior. Now, the Clemson commit is the No. 1 player in the entire senior class per Rivals. This year, Uiagalelei has an opportunity to contend for the status of the best player in the country.

After throwing for 3,846 yards and 39 touchdowns last year, Young “has the keys to the race car” more than ever, says Mater Dei coach Bruce Rollinson. Young and Uiagalelei are friends off the field, despite playing at rival schools. This year they once again have to go through each other to win league, division, and state titles. 247 lists the USC commit as a 5-star prospect.

247 ranks Garcia as a 5-star recruit and the 14th best junior prospect in the country. Last season he threw for 2,130 yards in only seven games on a freakish 75.7 completion percentage. He’s received offers from Alabama, Auburn, and USC, among 20 others.

Washington commit Garbers threw for 491 yards and 8 touchdowns in CDM’s season-opening win. That shouldn’t really surprise anyone as he threw for 4,135 yards and 55 touchdowns last season.

Speaking of mind-numbing performances at QB, Illingworth threw for 479 yards and 7 touchdowns in Norco’s season-opening win. Both were school records for the Oklahoma State commit.

Casey, a 3-star recruit, received 21 offers before eventually deciding on Fresno State. As a junior, he threw for 3,151 yards and 38 touchdowns, with a superb QB rating of 117.6.

Moss and Alemany (2-0) are off to a great start in 2019. Through two games, the Warriors have outscored their opponents 117-52. Moss, a 4-star recruit, already has 576 passing yards, 7 passing touchdowns, and a QB rating of 145.5. Moss has received offers from Alabama, Cal, Georgia, Michigan, UCLA and many more.

Stroud, a 4-star recruit, threw for 381 yards and 5 touchdowns in his first game of 2019. He’s currently deciding between upwards of 14 schools, including Baylor, Cal, and Oregon.

The 3-star recruit had a monster 2018 season for Venice and is committed to Duke. He threw for 2,560 yards and 26 touchdowns last year, and added 729 rushing yards.

Buchner missed last season with a torn ACL. But the 4-star recruit and Notre Dame commit is just getting started. He threw for 212 yards in his first complete game since his sophomore year, and will likely put up big numbers once he gets comfortable.