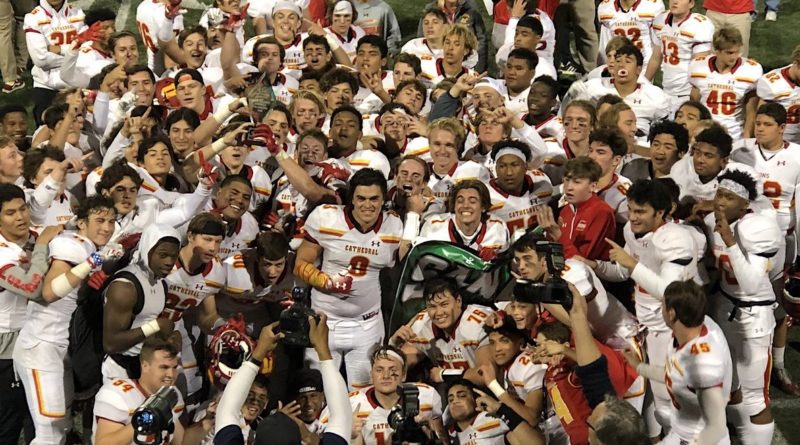 No. 2 Cathedral Catholic made a statement as they avenged last season’s loss to La Costa Canyon with a 42-9 victory over the No. 6 Mavericks. La Costa Canyon star linebacker Ozzie Nicholas was ejected following a tackle of Dons QB DJ Ralph and will sit out next week’s game under suspension.

El Camino traveled to Point Loma and picked up a big road win thanks to a late touchdown by Noah Sega to give the Wildcats a 37-33 win. They’ll have another big opportunity this week when they host Lincoln, who has moved up to No. 6.

Olympian, who wasn’t on many preseason radars, also turned some heads in week one. The Eagles traveled to the always hostile environment at Ramona and proceeded to score in each quarter en route to a 35-14 victory. Additional opportunities against Poway and Torrey Pines in the next two weeks will be valuable for Olympian.

Kearny QB Mario Alves, who transferred in from Madison, started off with a bang in his debut. He was 11-for-16 for 303 yards and threw 6 touchdowns in the Komet’s 65-16 over Calexico.

San Diego RB Mo Jackson began his junior season much like how he ended his sophomore season. He had 17 carries for 212 yards and 2 touchdowns in the Cavers 40-0 win over Crawford.

Rancho Bernardo WR Ja’shon Williams didn’t come out on the winning side Friday, but his 7 catches for 187 yards and 2 touchdowns certainly showed what he’s capable of this season.

Helix and Cathedral Catholic will have the chance to further their resumes in week two. The Highlanders will host Herriman from Utah and the Dons will host Saguaro, the top-ranked team in Arizona as part of the Honor Bowl.

Here is how I voted in the weekly San Diego Section media poll: