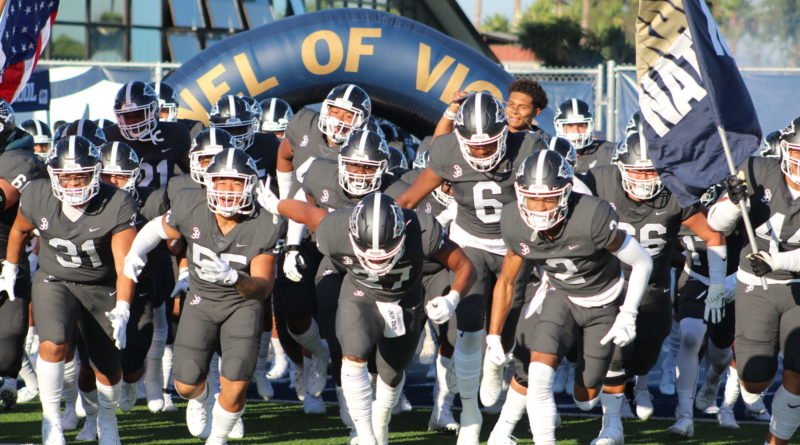 Defensively, the Braves allowed a single touchdown and kept star DeMatha running back MarShawn Lloyd in check for most of the evening. The South Carolina commit was held under 100 yards on the ground, but he did catch DeMatha’s lone touchdown.

The Braves are loaded with talent, but there were four players who stood out most Saturday.

Linebacker Danny Lockhart‘s name was routinely called out by the St. John Bosco public address announcer. He made several tackles and even showed his versatility when he tipped a pass away from a DeMatha wide receiver in coverage.

Safety Jonathan Vaughns might be a better baseball player, but he looked like a damn good football player Saturday. He used his quickness to repeatedly pressure DeMatha’s quarterback and also record tackles for loss. Vaughns missed a week of practice in the offseason due to playing with USA Baseball. The missed reps didn’t show tonight.

On the offensive side, sophomore running back Jabari Bates scored two TD’s.

Lastly, early in the game St. John Bosco’s offense sputtered a bit. Senior wideout Logan Loya pulled the Braves out of their funk on a fourth down play in the first quarter that set up the game’s first score. Loya was a reliable option all night for DJ Uiagalelei and finished with nine catches for 162 yards.

Overall St. John Bosco head coach Jason Negro was pleased with his team’s win, but he admitted after the game that the Braves, at least on the offensive side, have a lot of work to do.

“I was happy we got a solid victory,” Negro said. We won by 28 points over a nationally ranked team, and we were nowhere near our best. We struggled offensively just getting lined up sometimes, false starts, holding calls, penalties, errant throws, drops. There are a litany of things we made a mistake on, on the offensive side.”

St. John Bosco put the game out of reach on Bates’ first touchdown run in the third quarter. The two-yard scamper made the score 28-7 in favor of the Braves.

DJ UIAGALELEI NOT HIMSELF

“They got DJ off of his spot and made him move around a little bit,” Negro said postgame. “Mechanically, I don’t think he was at his best tonight.”

Matayo Uiagalelei, the younger brother of DJ, made his debut for St. John Bosco Saturday night. In Negro’s ten years, the younger Uiagalelei is just the second ever freshman to play on the varsity team.

“To play a nationally ranked team in your first ever high school game as a ninth grader is pretty impressive,” Negro said. “I’m super proud of how he approached the game from a mental standpoint. He showed a lot of maturity.”

Uiagalelei plays tight end and defensive end. He made his most impactful play on offense Saturday when he recovered a teammate’s fumble.