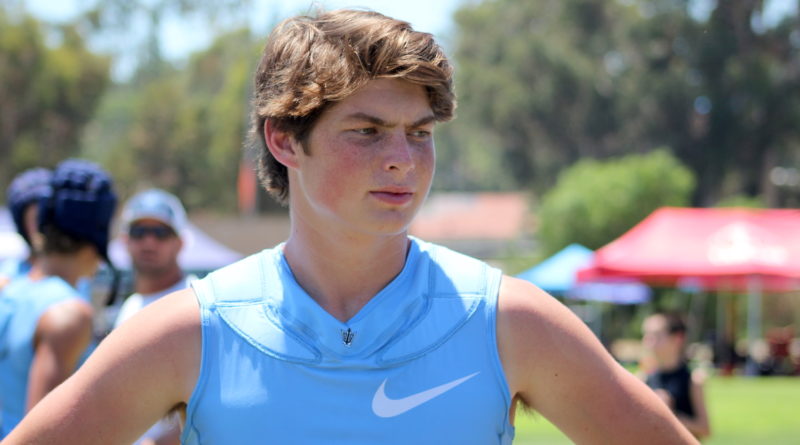 DJ Uiagalelei threw for 322 yards and Logan Loya had 9 catches for 162 yards to lead the Braves to a nationally televised season-opening 35-7 win over DeMatha (Maryland) on Saturday night.

The Monarchs dominated Corona Centennial 42-12, looking every bit the part of a national title contender. Watch the highlights:

The Huskies were down 35-0 at halftime and were never in the game in their 42-12 loss to Mater Dei. They’ll look to rebound next week against Orange Lutheran.

The Spartans lost 24-14 at home to St. Thomas Aquinas, who is ranked No. 1 in the country by USA Today. De La Salle will face Central Catholic (Modesto) next week.

The Lions beat East (Utah) 24-14 at home. They travel to San Diego next week to play St. Joseph Regional (NJ) in the Honor Bowl.

Fresh off of a Division 1-AA state championship in 2018, the Bulldogs kick off their season on Aug. 30 at Jesuit.

New quarterback Peter Costelli threw for 162 yards and two TDs and the Diablos racked up over 200 yards on the ground in a 38-14 road win over Konawaena (Hawaii).

LeShaun Bell led the charge on defense as the Coyotes smothered Bakersfield in a 29-14 win Friday night.

Jake Garcia and the Gauchos kicked off their 2019 season Saturday with an impressive 32-7 road victory over No. 18 Buchanan.

The Trailblazers, who lost to Liberty in last year’s Division 1-A state championship, beat Westlake 26-7 to open the 2019 season.

The Dons had their way with La Costa Canyon in a 42-9 season-opening win. They will host Saguaro (Arizona) next Saturday in the Honor Bowl.

Ethan Garbers put on a show in the Sea Kings’ opener, throwing for 480 yards and EIGHT touchdowns in CDM’s 57-20 win over Downey.

The Lancers rolled to a 42-18 season-opening win over Aquinas. Next week will be a big test when they travel to Oaks Christian.

The Grizzlies cruised to a 47-12 win over Edison in their season opener.

Running back Kendall Milton, a Georgia commit, had 133 yards and a TD, but it wasn’t enough as the Bears fell to No. 10 Narbonne 32-7 on Saturday night.

Upland was upset by La Habra 21-14 in their season opener on Thursday night. But linebacker Justin Flowe still delivered the highlight of the game:

The Friars open their 2019 season on Aug. 30 at JW North. The following week they travel to Vegas to play Bishop Gorman in the Polynesian Football Classic.

St. Augustine rolled to a 37-7 win over Bonita Vista on Friday night. They will travel to Eastlake next week.

OLu took care of business in their opener, holding off San Juan Hills 27-21. They will now gear up for next week’s showdown at Corona Centennial.

The Knights, the favorites to win the Mission League, open their season on Saturday, Aug. 31 at Desert Vista (Arizona).

The defending Division 2-A state champions open their 2019 season next Friday at Sierra Canyon.

La Habra justified their ranking by stunning No. 19 Upland 21-14 behind the play of Ohio State commit Clark Phillips (two interceptions). Watch the highlights: