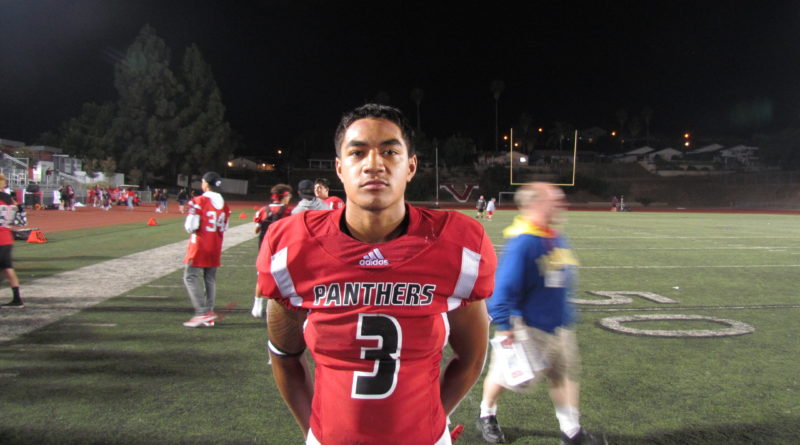 VISTA — The Vista high school football team got their season started with a 53-28 win over St. Margaret’s on Saturday night in a San Diego Section football game. Here are five takeaways from the game:

Senior running backs Desmond Taua and David Flores started quick and finished strong as the Panthers offense moved at will on Saturday night.

“It was great, our offensive line came out tonight and played their butts off and our running backs just did our job today,” said Taua, who ran for three touchdowns and also had a 50-yard run after faking a punt.

Junior defensive back Grady Chancellor stepped up for the Panthers defense as he snagged two interceptions to help contain St. Margaret’s passing game.

“I saw the quarterback’s eyes, he was throwing wherever he was looking, and I kinda just jumped it when I saw it,” Chancellor said.

Vista started the game by forcing St. Margaret’s into a three-and-out and returned the subsequent punt 45 yards down to the 10-yard line.

“That was actually a crazy moment; sadly my friend couldn’t score it. That was definitely a game changer right there to start the game,” said Flores, who scored on a nine-yard run one play later to get the scoring started.

The Tartans turned it over on downs as they were driving towards the Panthers red zone. Vista countered with a Desmond Taua run around the right side and up the Panthers sideline that resulted in a 74-yard touchdown.

“It was just our offensive line making their blocks, it was just a great day for them,” Taua said postgame.

Taua finished the game with nine carries for 223 yards and three touchdowns.

RUNNING AWAY WITH IT

Taua and Flores, along with Brian Kelly and Aidan Villejo, combined for eight rushing touchdowns on the night.

“It started with our offensive line first. We came in, had to run the ball hard and block up good,” Flores said.

The trio of Taua, Flores, and Kelly combined for 2,851 rushing yards and 32 touchdowns last season while they were all juniors and were able to start their senior seasons on a high note.

The Panthers operated their Wing-T offense on Saturday largely to perfection. Vista’s offensive linemen were able to open holes and seal edges all night. It helped Taua, Flores, Kelly, and Villejo run wild throughout the game.

The Panthers (1-0) will visit La Costa Canyon next week, while the Tartans (0-1) will host Yucca Valley.