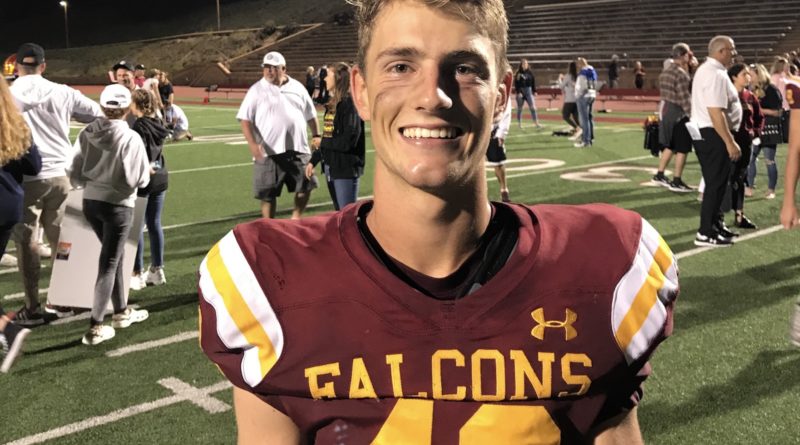 Torrey Pines linebacker/tight end Matt Lauter scored both first half touchdowns for the Falcons, first by intercepting a tipped pass and returning it 40 yards for a touchdown then catching an 18-yard pass across the middle to give Torrey Pines the lead for good.

“It was awesome, once I caught that ball, I just turned up the sidelines stuck my foot in the ground and scored,” Lauter said after the game. “The crowd’s going crazy, that just turned the momentum of the game right away.”

Torrey Pines fullback Cael Helfrich was a wrecking ball in the second half as he scored two big touchdowns to extend the Falcons lead.

“Oh man I was really nervous because I didn’t play last year at all. I come back this year as a starter and expectations are high,” Helfrich said.

“First of all, it feels great. Everyone was saying that Torrey Pines was just gonna have an off year,” said senior cornerback Tyler Wheeler who had the Falcons third interception of the night. “Coming out and making a statement against such a good team just shows we’re reloading, we’re ready to go.”

The Falcons forced Los Alamitos into a three-and-out that was capped by Ryan Rice and Marco Notarainni combining on the only sack of the night. That gave the Falcons the ball back with 6:30 in the third quarter, leading 23-10.

“Our coaches are really good at picking up on stuff, patterns they do on offense, we all fixed it and succeeded in that part,” Notarainni said.

Los Alamitos struck for 60 yards on their first play from scrimmage and scored a couple plays later to make it 7-0. The Falcons defense tightened up from then on, intercepting the Griffin’s three times in the first half to regain momentum.

Sophomore quarterback Brayden Fowler-Nicolosi, making his varsity debut, looked poised throughout as he converted on third downs and completed a pinpoint pass across the middle to Matt Lauter that ended up being the game-winner.

“It was crazy getting to run out of the tunnel for the first time, get to hear the crowd go crazy. It was pretty nerve-racking at first, but once the first play goes off, the nerves go away,” Fowler-Nicolosi said after the season opener. “We just grinded so hard in the off season. After practice just keep throwing routes, keep doing the extra work so that the chemistry is perfect in the game like that.”

Torrey Pines’ starting offense featured 3 juniors, 3 sophomores, and a freshman but seemed unfazed as they consistently moved the ball across the field against a talented Southern Section opponent.

The Falcons had Los Alamitos all out of sorts trying to defend their patented Wing-T offense. Pre-snap shifts and motions combined with reverses and double passes didn’t allow the Griffins to get settled in all night.

“I think we confused them, that’s a lot of what our offense is about,” said senior fullback Cael Helfrich, who didn’t play football as a junior. “We also just wore them down; second half every drive we were just going, five, five, five, they couldn’t stop us. I think we really just wore them out.”