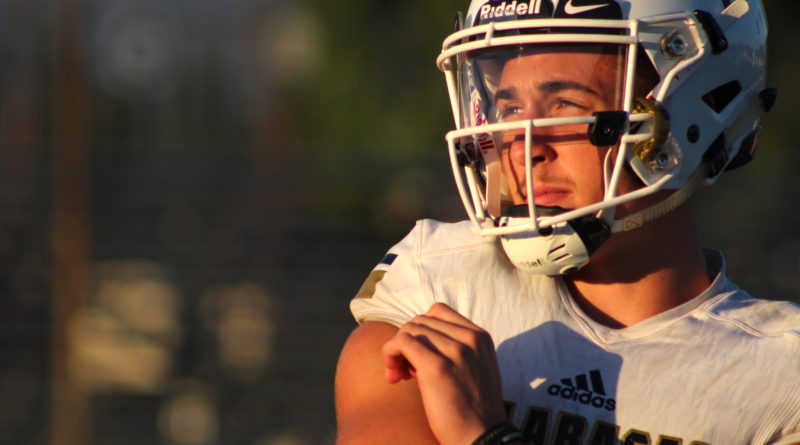 Calabasas defeated Bakersfield 29-14 Friday night in their first game of the 2019 high school football season. Here are five takeaways from the game.

Nobody is immune to early-season jitters. If not for Calabasas racking up 15 points off of special teams and one safety, the score would’ve been much lower.

Both the Coyotes and Drillers struggled offensively for much of the game, in particular the first half. Both quarterbacks, Calabasas’ Jaden Casey and Bakersfield’s Ricky Easterwood, looked out of sorts at times. Their reads could’ve been quicker, particularly to start the game, and they seemed a little tentative. And both had a few more dropped balls or miscues by receivers as well.

Bakersfield had a few blown snaps in the first half that resulted in a safety and a special teams touchdown for Calabasas.

PLAY OF THE GAME

Calabasas’ Larry Turner took a kick return to the end zone with 5:16 left in the first quarter. The blocking he received was excellent, but he was just too quick and shifty for the Drillers’ tacklers.

The Coyotes got another special teams touchdown from Jaylen Thompson with just seconds left in the first half. Bakersfield’s longsnapper sailed a snap over the punter’s head, and he recovered the ball and barely got a punt off in his own end zone. Thompson was there to catch it and take it roughly 35 yards to the house to blow the game wide open.

The Coyotes’ defense was what set them apart in this game. Bakersfield only scored twice.

Their first touchdown was on an 85-yard reception taken deep by Blaine Abbott that might’ve been the only real blunder of the night for Calabasas’ secondary. Bizarrely, Bakersfield’s second touchdown was on a fairly lengthy drive in which Calabasas was missing a defender on numerous snaps. Multiple observers pointed out halfway through the drive that the Coyotes’ only had 10 on the field, and a few Calabasas fans were shouting as much from the stands. It temporarily seemed like their defense had holes in it, and well, that was the main reason.

Calabasas’ defensive lineman LeShaun Bell was the most dominant player on the field. He repeatedly blew up Bakersfield’s plays by either going through or speeding around their offensive line, and registered several tackles for loss. Bell also routinely chased down Bakersfield’s rushers just past the line of scrimmage before they could gain steam. Sophomore MLB Jason Medrano was on the scene for many of those stops as well.

Larry Turner also had a strong night between both the kick return touchdown and leading Calabasas’ secondary at safety.

Calabasas QB Jaden Casey and WR Johnny Wilson struggled to find each other out of the gate, but eventually got it going. Casey took a while to warm up, throwing interceptions and slightly off passes early on. But once he got going, their offense turned it up. He finished with one rushing touchdown and one touchdown pass. His TD pass was to Wilson, who finished off a touchdown drive with 3:29 left in the second half with two contested receptions.

Bakersfield went for a risky touchdown pass with a minute left down by two touchdowns. They knew that they had to make something happen quick and then recover an onside kick in order to have a chance. Larry Turner saw it coming the whole way, and picked it off with ease to effectively end the game.