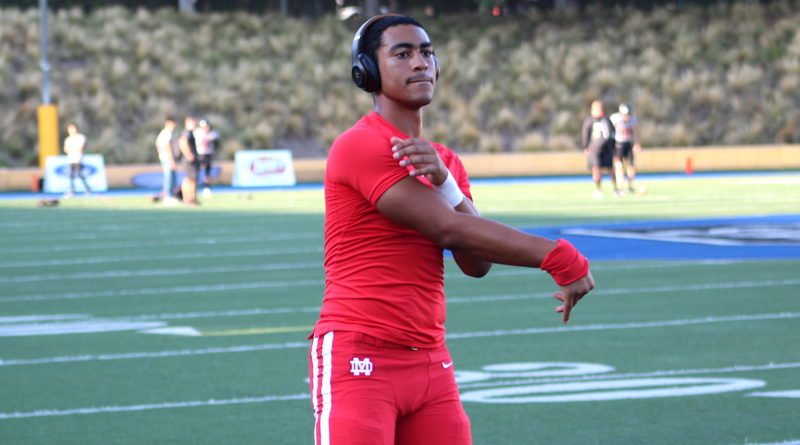 Mater Dei beat up on Corona Centennial 42-12 Friday night in the 2019 regular season high school football opener for both teams. Here are five takeaways from the games.

Mater Dei had a handful of players impress Friday night. USC bound quarterback Bryce Young finished 19 of 26 passing for 191 yards, three TDs and a pick. Young plays with incredible smarts. At one point in the game, the senior could have taken on a few Corona Centennial defenders in an attempt to score, but instead he slid and threw a TD pass a few plays later.

Defensively, Mater Dei really stood out. Ray Leutele had a sack and a pick-six. Kobah Fuamatu and Raesjon Davis consistently pressured Corona Centennial’s quarterbacks and stuffed the run. The Monarchs secondary looked great too. Jaylin Davies had a few pass breakups and the unit was able to keep star Corona Centennial receiver Gary Bryant out of the end zone.

Mater Dei head coach Bruce Rollinson was delighted with his team’s performance in their opening game. The Monarchs were prepared and ready to play.

“I thought the offense really did a good job, picking it up. … We executed well and I can’t say enough about the defense. They had two goal line stands. That’s a difference maker.”

Corona Centennial head coach Matt Logan was proud of how his team fought until the end Friday night. Postgame, he was asked if two of the top teams in the area playing to a blowout was good for high school football.

‘There is a little bit more of a separation than what there has been probably, but we’ve got to come out and just get better. The only rankings that matter are the ones at the end. … There’s a lot of football to be played.”

Mater Dei linebacker Ray Leutele‘s pick-six made the game 28-0 near the end of the first half. That was the point of no return for Corona Centennial.

When Rollinson said that Young has the “keys to the race car” at Trinity League media day, he wasn’t kidding.

“Five of his throws he audibled at the line,” Rollinson said of Young. “That’s the difference from junior year to senior year. He has a grasp on the offense now. He checked out of two plays where he saw what they were doing and he made them pay the price.”

We’ll continue to appreciate Young as a high school QB, but we’d be lying if we didn’t say we were excited to see him at USC.