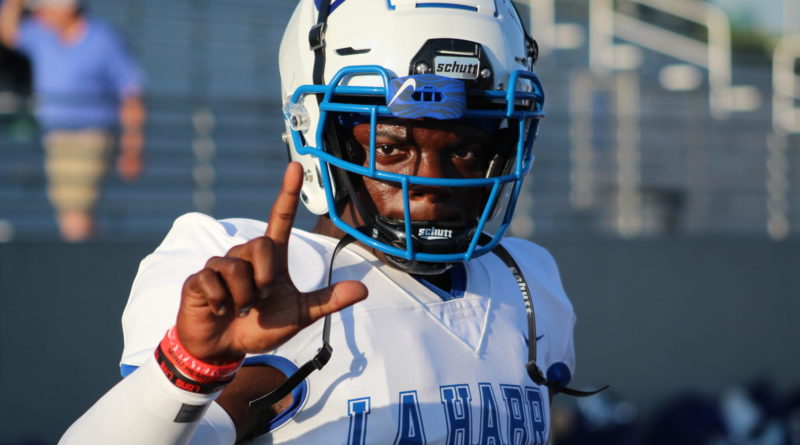 Highlander quarterback Ryan Zanelli was 15 of 22 passing for 224 yards and three touchdowns in the first half. He failed to complete a pass in the second half though. Two of his touchdowns went to senior receiver Brandon Vasquez.

Upland’s Justin Flowe was as advertised Thursday night. The linebacker is one of the best in the nation and plays like a man amongst boys. He finished the defeat with 15 tackles and a rushing touchdown. He sparked the Upland offense on the drive he scored, which had been pedestrian to that point. Flowe is an incredible football player.

Highlander head coach Frank Mazzotta loved seeing his team’s hard work pay off in game one, especially against an Upland team that had beaten La Habra in each of the last two seasons.

“Upland has a great program. … The Flowe brothers, Juju Dedman, I mean holy cow. This is a great win for La Habra high school.”

Phillips had the quote of the night though.

Phillips’ interception late in the fourth quarter allowed the La Habra offense to go into victory formation. The Highlanders dominated the first half, but Upland fought back in the second half and put themselves in a position to tie or take a lead before Phillips’ pick.

“We had a lot of confidence because of film study,’ he said.

Mazzotta broke it down in a bit more depth.

“[Upland] had run that before, that triple seam [play],” he said. “They’re trying to get that ball down the seam with the single high safety. The corner’s job is to help us out on that seem route and who’s better than Clark to do that?”

La Habra wasn’t one of the 10 teams ranked in the Division 3 Southern Section coaches poll to start the year. That will surely change after this victory.

Mazzotta said his team doesn’t pay attention to the rankings, but he also added: “if you want respect you go get it, that’s what you do. You don’t ask for it before the season starts.”

Noted. La Habra should be on every high school football fan’s radar after this win.