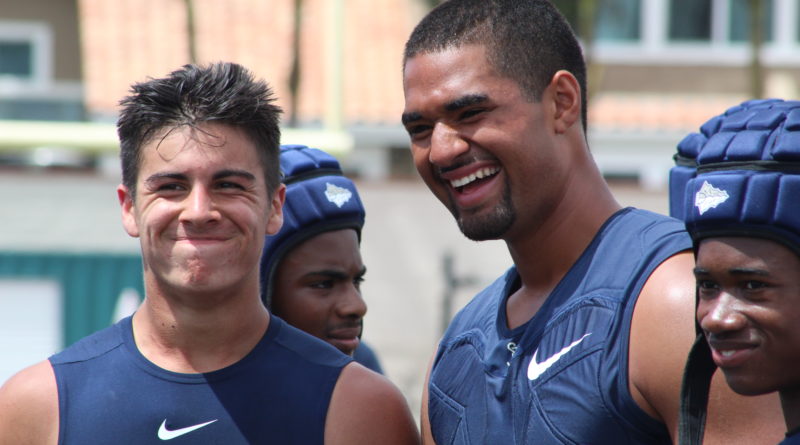 Bosco’s senior core of DJ Uiagalelei, Drake Metcalf, Kobe Pepe and Kourt Williams has lost to Mater Dei in section championship games the last two seasons. Last year’s loss came after the Braves had beaten the Monarchs 41-18 in the regular season. They feel like they let last year’s championship slip away and are desperate to get back on top.

The margin between Bosco and Mater Dei is razor thin. Orange Lutheran transfer Logan Loya will be the Braves’ x-factor. Having a high-level senior receiver with Trinity League experience will be what tips the scale in St. John Bosco’s favor in 2019.

The Monarchs have a great chance at an open division state championship three-peat. Head coach Bruce Rollinson said quarterback Bryce Young has “the keys to the race car” this season. The USC commit will have a huge year.

Mater Dei must replace Bru McCoy and Elias Ricks. McCoy played both ways as a defensive lineman and was the Monarchs’ number one receiver in 2018. Ricks intercepted three passes and returned them all for scores in the first half of last year’s semifinal win over Corona Centennial. Even for Mater Dei, where they don’t rebuild, they reload, making up for the loss of these two will be extremely difficult in the St. John Bosco game(s).

The Huskies look like the last great public school power in Southern California high school football. Corona Centennial opens their season against Mater Dei on August 23rd. That game will reveal just how big the gap is between the big-two and everybody else.

Junior defensive lineman Kore Foreman has emerged as one of the top 2021 recruits in the nation this offseason. He recently visited Clemson.

The Lions lost their two biggest games to St. John Bosco and Oaks Christian by a combined eight points last season. They return a loaded offensive line led by Michigan commit Jeffrey Persi that will pave the way for running back and Cal commit Chris Street. This should be the best team of the Pat Harlow era at JSerra.

New quarterback Peter Costelli takes over and will work with head coach Chad Johnson, one of the top offensive minds in the country. It’s a match made in heaven.

Quarterback Jaden Casey (Fresno State commit) has the luxury of throwing to two of the best receivers in the country in Oregon commit Johnny Wilson and LSU commit Jermaine Burton.

The always dangerous Lions bring back a strong core from last year’s Southern Section Division I semifinalist team led by linebacker Mister Williams and receiver Bryce Farrell (Stanford commit). They’ve also added a few transfers in Patrick Roberg, a linebacker from Westlake and Derek Boyd a running back from Reseda.

The Gauchos are loaded and would be higher on the list if it weren’t for the current LAUSD investigation going on involving their football program. Quarterback Jake Garcia and linebacker Jordan Banks are special talents.

The Trailblazers lost to Liberty in last year’s Division 1-A state championship. They have a large number of returners led by senior linebacker JD Hernandez and junior defensive back DJ Harvey.

The Sea Kings have the best quarterback, receiver and tight end trio in Southern California and maybe even the nation in Ethan Garbers, John Humphreys and Mark Redman. All three are committed to Pac-12 schools.

Head coach Josh Henderson has built a power. The Lancers return Mikey Zelle under center and have a lot of size on defense led by Jay Toia, a USC commit.

Justin Flowe is the best linebacker in the country and has been at Upland since his freshman year. Running back Tyevin Ford will run over plenty of defenders in 2019. He’s 5-foot-11, but weighs over 230 pounds.

Head coach Troy Thomas has a strong team and his two top players might be sophomores in QB Noah Fifita and WR Tetairoa Mcmillan. Senior tight end Jake Overman probably won’t agree with that though.

RJ Regan leads an Orange Lutheran team that hopes to get out of Mater Dei’s and St. John Bosco’s shadow in the Trinity League.

The Knights are favorites to win the Mission League. Kevin Rooney has been in charge at ND for 40 years; this will be one of his top teams led by quarterback Cooper Meek.

The Cardinals won the Division 2-A state championship last year. Quarterback Jalon Daniels was surgical in their playoff run. Defensive back Makell Esteen has 19 career interceptions.

La Habra has talent all over the field led by Ohio State bound cornerback Clark Phillips. The Highlanders will contend for a Division 3 Southern Section championship.

After sweeping their way through the Mission League last season, the Lancers were unlucky to draw Mission Viejo in round one. Bishop Amat lost almost all their starters, but they certainly know as a program what it takes to win at this level.

Rancho Cucamonga has a ridiculous amount of future-D1 playmakers coming back this season, starting with star QB CJ Stroud. Their defense is inexperienced, but Coach Verti has a lot of faith in their young talent.

The Cavaliers are returning so much talent on both sides of the ball, with more defensive experience than some of their scoring-oriented contemporaries. Still, with 3,000-yard passer Doug Brumfield and his favorite targets returning, their offense should continually make headlines.

Alemany features one of the best young QB/WR duos in the country with Miller Moss and Kevin Green. They aren’t huge and their defense isn’t done piecing things together, but their fast-paced, explosive offense makes them a threat to outscore anyone.

QB Cade McConnell looks to lead a well-balanced Los Alamitos team that has a decent amount of veteran experience. The defense was dominant most of year, but lost some key seniors. If they can seamlessly replace those seniors at receiver and on defense, they could be a major playoff threat.

AJ Duffy had a historically great freshman season at QB, and makes a crazy explosive duo with RB Jordan Jefferson. If their young defense can prevent big plays, Rancho Verde is a threat to upset nearly anyone.