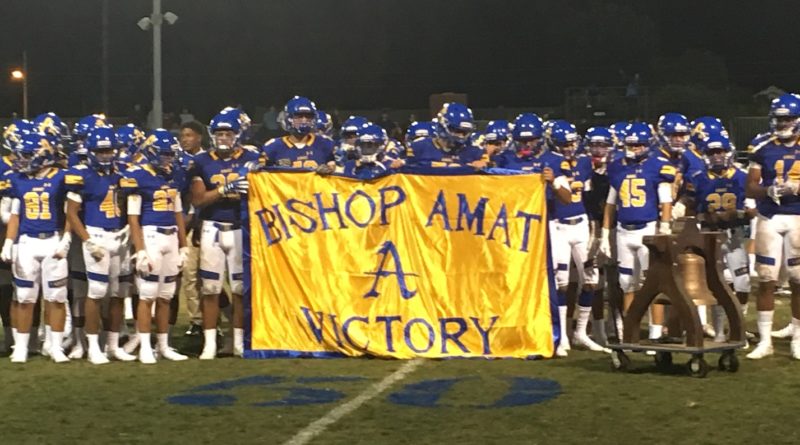 Bishop Amat opened its 2019 season with a 17-0 shutout of Diamond Ranch on Thursday night. Here are five takeaways from the game.

Star running back and Cal commit Damien Moore is finally back after missing almost all of last season with a knee injury. In his absence, Bishop Amat still won the Mission League, but it was a much tougher time without the junior Moore. On Thursday, Moore finally made his return to the field, and rushed for a whopping 206 yards. He was a workhorse, carrying the ball 25 times, and he also picked up 30 receiving yards.

Watching Moore dominate in his return to the field was a special moment for Bishop Amat and their fans. His two touchdowns were the only ones of the game for either team. And they came on two consecutive drives that he manufactured pretty much all by himself.

His first touchdown was a 48-yard breakaway with 1:54 remaining in the second quarter. Diamond Ranch immediately turned it over, and then Moore added another touchdown off a two-play drive — a 32-yard reception and a 5-yard TD run.

Moore is back and as good as ever. Also stealing the show was Bishop Amat defensive lineman Ethan Rodriguez. His combination of size and quickness on the defensive line gave Diamond Ranch fits. Their offensive line could not contain him at any point in the game. While he didn’t finish with a ton of sacks or tackles, he blew up many of the Panthers’ plays. Joining him on several of those edge rushes was fellow lineman Elijah Ponder.

If not for the excellent scrambling ability of Diamond Ranch’s QB Cade Miller, this game probably wouldn’t have been close. Miller created a ton of first downs by escaping from the pocket. He threw for 215 yards and did everything he could to keep Diamond Ranch in the game.

Adrian Ochoa knocked in a 47-yard field goal with 2:44 left in the game to give Bishop Amat a 17-0 lead. There were a number of moments before that when it seemed that the Lancers were on the verge of sinking Diamond Ranch. But every single time, the Panthers would pull out a clutch stop and hang around. Once Ochoa made it a three-possession game, it was done.

Moore’s remarkable return brought a 14-point burst to life in the span of hardly over a minute. Outside of that though, Bishop Amat’s offense wasn’t dominant. But they shut out an excellent Diamond Ranch offense, and mostly kept them out of the red zone. Their defense set the tone all game, plain and simple.

The defensive display by Rodriguez and Ponder was extraordinary. But for them, it was just another day at the office.

“We were just doing our jobs, and holding ourselves accountable. Making sure we were doing what we needed to do,” Rodriguez said after the game. “We have a good chemistry together, knowing what we need to do whether it’s the pass or the run.”

Next week, Bishop Amat will take on Paramount in another home game. Diamond Ranch will look to bounce back at Chino Hills.