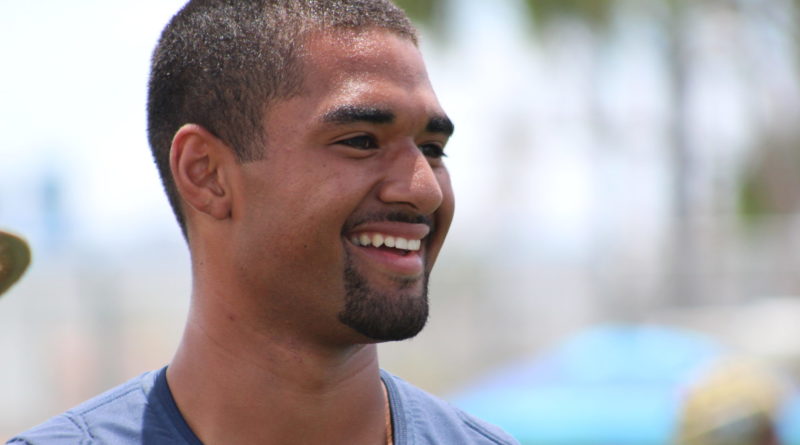 With high school football beginning for the majority of Southern California teams this weekend, here are five bold predictions before any balls are snapped.

Predicting before the season starts allows me to take full credit if I’m right. “Did you see my post!? I knew about them months ago.”

If I’m wrong, I can simply blame it on the prediction coming so early. It’s an easy way out. “They’re preseason predictions, what did you expect???”

Without further ado, here goes nothing.

It’s really a 50/50 shot between Mater Dei and St. John Bosco, so to some this might not be the hottest take in the world. To others it could be considered bold because Mater Dei has won the last two state championships after beating St. John Bosco in the Division 1 Southern Section title game.

Mater Dei has been the St. John Bosco senior core’s white whale for the last two seasons. The Braves did beat the Monarchs in the regular season a year ago, only to have their hearts ripped out in the title game.

It’s crazy to pin a whole potential championship run on one player and that’s not what I’m trying to do, but I think Bosco receiver Logan Loya (Orange Lutheran transfer) will be the Braves’ difference maker. He gives quarterback DJ Uiagalelei another option when the going might get tough against Mater Dei. I think he’ll rise to the occasion and be a big part of why the Braves win it all this year.

The Knights finished second in the Mission League last year to Bishop Amat. When the two teams met in the regular season a year ago, the game had to be played over two days because of lightning. Notre Dame head coach Kevin Rooney didn’t make any excuses for his team’s performance at Mission League media day, saying that Amat had to deal with the weather too. I’m sure the veteran coach would have loved to have played Bishop Amat on a clearer night though.

I like Notre Dame because I think they have a group of players that fit into Rooney’s style perfectly. Notre Dame’s head coach believes in running the ball to set up the pass. Junior running back Anthony Spearman is fully healthy after suffering a high-ankle sprain last season and will get plenty of touches. He’s a special talent and will be a nightmare for opposing defenses.

Defensively, Notre Dame returns nine starters, the most of any of the Mission League teams. Led by Andre Bray and Sean Guyton in the secondary, this group will be tough to score on.

Calabasas will win the Marmonte League

Last year’s regular season meeting between Calabasas and Oaks Christian to decide the Marmonte League title got ugly before it even started. Oaks Christian senior Kayvon Thibodeaux got in the face of Calabasas senior Mycah Pittman during the captains’ meeting at midfield.

Clearly these teams don’t like each other. Oaks Christian went on to win last year’s game 21-13.

I think Calabasas gets revenge this season and wins the league. Everyone knows about QB Jaden Casey and receivers Johnny Wilson and Jermaine Burton. Coyote head coach Chris Claiborne has a lot more confidence in both his offensive and defensive lines this season and that will make a big difference. Calabasas shouldn’t get pushed around up front in 2019.

Oaks Christian lost their starting quarterback, running back and star middle linebacker from last year’s team to graduation. For the most part, Calabasas is returning their studs and most of Oaks Christian’s have graduated. Of course the Lions still have a lot of talent, but I think Calabasas has more.

Like I wrote about in our Division 1 LA City Section preview, Birmingham felt hard done by last season’s MaxPreps playoff rankings. The Patriots thought they should have been the second seed in the Open Division, and instead had to settle for number four. That meant they played eventual champion Narbonne in the second round instead of the championship game. If they had played Narbonne in the section championship, they would have qualified for the state playoffs.

I think Birmingham will make the Open Division championship game this season because they’ve replaced last year’s quarterback Jason Artiga with Cathedral transfer Jackson Dadich and have some great players coming back. Garfield and Carson are contenders to meet Narbonne also, but right now I like Birmingham.

Dadich played JV at Cathedral last year. The Birmingham staff is high on him and it seems like he’s making a smooth transition.

WR/RB/DB Mason White, WR/DE Arlis Boardingham, DL/OL Carlos Rivera, SS/RB Delamonte Barnes, LB Christopher Figuero, DE Gabriel Rothhammer and OL Max Jimenez are all back for the Patriots after playing big roles in their Open Division playoff push and West Valley League title run last year. I have them at No. 2 in the City in the preseason.

Franklin senior quarterback Alfred Bobadilla put up huge numbers as a junior. He threw for 3,267 yards and 38 TDs. Both of those marks led the City Section.

In addition to Bobadilla, Franklin returns 14 other starters. On the defensive line, Hugo Escobedo and James Quintanilla will cause problems for Division 2 opponents. It’s truly championship or bust for the Panthers.

Canoga Park and Verdugo Hills are the two teams I think can best challenge Franklin, but Division 2 is the Panthers’ to lose.