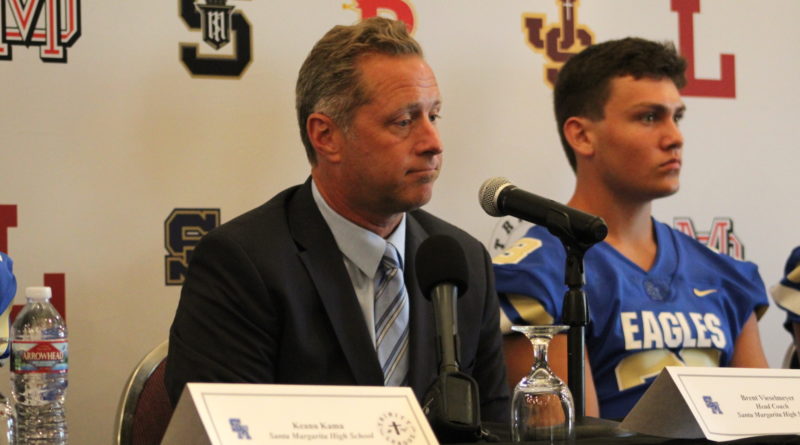 Brent Vieselmeyer is in his first season at Santa Margarita.

Speedy defensive back left for St. John Bosco in the offseason before deciding to return. He holds offers from BYU and Nevada.

After a great sophomore year, Wilkins is up to 6-5, 240, and is a strong candidate to break out further. He’s already received an offer from San Jose State, and might just be getting started.

At running back, Nick Barcelos was the second leading rusher for the Eagles with 442 rushing yards. He’s also received four D-1 offers as a long snapper.

Santa Margarita went winless in league last season, but that’s because they’re playing in arguably the best league in the country. This year, every member of the Trinity League will automatically make the playoffs, regardless of league record. So, paradoxically, the Eagles could once again finish near the bottom of their league, and still be a legitimate threat to go on a playoff run.

Losing star QB Peter Costelli and WR Chase Nenad to Mission Viejo hurts, but whoever fills that void will have playmakers to work with. RB Nick Barcelos is back, who also happens to be an elite long snapper. Junior Gary Morrison is a strong breakout candidate at TE.