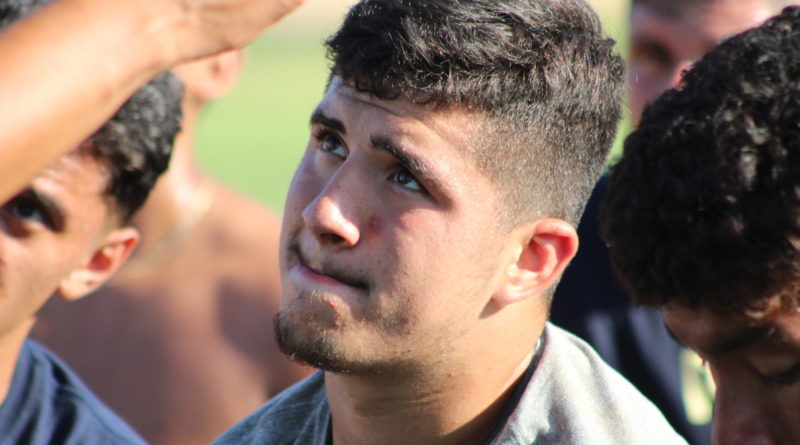 Last season, Locke won the LA City Section Division 2 football title as a five-seed, beating Roosevelt 22-20. Locke and Roosevelt have both moved on to Division 1, leaving Franklin, Canoga Park, and Wilson as the clear favorites.

Here is our projected top 5 in Division 2:

Franklin was the first overall seed in the City Section Division 2 playoffs last season and lost in the semifinals to eventual champion Locke. This season Franklin returns seven starters on offense, and eight on defense, and are hungry for another championship opportunity.

The Panthers return probably the best QB in the division in Alfred Bobadilla, who threw for 3,267 yards last season. Also returning are a pair of RBs in Angelo Vera and Khristopher Johnson who both rushed for over 500 yards. WR Vincent Escobar is yet another strong returning playmaker, having hauled in over 800 yards receiving last year. While he didn’t play much last season, coach Narcisco Diaz has substantial confidence in WR Chris Jauregui as well. Angel Carmona will anchor the offensive line. The Panthers’ offense should be very explosive.

Wilson is losing last season’s top two receivers and running backs, but star QB Julian Hernandez isn’t going anywhere. He threw for over 2,000 yards last season, and will still have a very good receiver in DeAnthony Jackson. Richard Haro and Branden Zamora are candidates to step up at receiver as well. Jackson (DE) and Haro (SS) are two of the top returners on defense. The Mules should be in the mix for the D-2 championship.

As reigning semifinalists who almost toppled Roosevelt, Canoga Park is in the conversation of top contenders as well. Last year they dominated most games on both sides of the ball, and they’re returning every single top playmaking threat.

Star quarterback David Gomez will be back for his senior year after racking up over 2,000 passing yards last season. Jorge Hernandez was sensational at RB, rushing for 942 yards and 23 touchdowns, and he was only a junior. Speaking of underclassmen sensations, Dominic Arango-Serna is back after racking up over 1,000 receiving yards as a freshman. And just about all the Hunters’ other rotation players at RB/WR – Joshua Christopher, Sergio Garcia, Myles Jones – are still here. This offense, stacked with both continuity and talent, should be too much to handle for almost all D-2 teams.

Moving down from D-1 after a winning season is Jefferson. The Democrats return almost their entire core on both sides of the ball, and could easily take a big leap. With their experience and continuity, they are a top candidate to go on a playoff run.

Most members of their run-centric offense are returning. Dual-threat QB Frederick Louden will be a junior after running for 1,152 yards last season. Top running back Jermaine Lovelace will be a senior after running for 666 yards and 15 rushing touchdowns last season. RB2 Desmon Martin will return after rushing for 471 yards as a sophomore. Jason Corral and Wayshawn Moore provide yet more options at running back. Top receiver Jaylen Kelley will be a senior as well.

The majority of Jefferson’s top defenders are returning too, many of whom play both sides. Kelley recorded over 100 tackles last season at LB. Martin (CB), Louden (DB/LB), and Moore (CB) are all key members of the secondary. They are joined by Brian Cesena, a senior at safety. X-Zavier Ramirez (LB) and Tyler Wallace (DB) highlight the interior defense.

Fremont went relatively untested through the D-3 playoffs last season before falling to Santee 52-20 in the championship. They’re losing a significant amount of talent, particularly on defense, but are still quite intriguing.

Like Jefferson, they run a very run-heavy offense. It will revolve around the duo of dual-threat QB Jayden Amos-Hollins and Keljawn Keys (WR/SB/RB). Hollins racked up 672 passing yards, 779 rushing yards, and 19 combined touchdowns last season. Keys led the Pathfinders in both receiving yardage and touchdowns. Outside of those two, it’s unclear who will step up at the skill positions.

On defense, Amos-Hollins (LB/DB) and Keys (DB) are top contributors as well. George Carrillo, Dominic Conner, and Jose Cosio form what should be a strong defensive line.

With the amount of talent they’re returning, Verdugo Hills projects as a strong playoff team as well. Star QB Alex Moreno is a threat to throw for over 3,000 yards as a senior. Leading rusher Ethan Estrada is one of the best RBs in the division as well. Brian Bedrosian and Manuel Romero return as last season’s top options at wide receiver.

Defensively, it all starts with MLB Tony Estrada, who recorded well over 100 tackles last season as a sophomore. He’s part of a strong linebacking duo with Alex Ibarra (OLB). DTs Andy Valenzuela and Asael Santiago round out the defensive interior. Jaden Keyshisyan highlights what will be a fairly inexperienced secondary.

Coming off a very solid season as Division 3 semifinalists, Manual Arts could win D-2 playoff games if they can hang tight on offense. They’ll be losing the do-it-all tandem of Jaylen McElroy (dual-threat QB) and Thomas Whitehead (WB/RB). That will be very hard to replace as those two did most of the heavy lifting last season. However, they are returning two RBs in Virgil Tynes III and Michael Blow who both ran for nearly 600 yards last season. Blow is a threat to catch the ball as well. Carlos Concha is likely to be McElroy’s replacement at QB.

The Toilers should be a good defensive team with the returning talent they have. LBs Tynes III and Blow dominated last season as sophomores to the tune of 264 combined tackles. Elias Ledesma is another strong contributor at linebacker. And 300-pounder Deven Wagner and 320-pounder Donovan Miller provide great size on the D-line. Steven Neria was a standout at DB/ATH, and is joined in the secondary by Rashaad Laws.

Marshall struggled last season but might have enough young talent coming back to turn things around. There will be some solid continuity at the skill positions. Kevin Rapalo is likely to be the full-time QB and the Barristers also return their top rusher in RB Vikter Magana. Additionally, RB/WR Ricky Garcia returns after leading Marshall in receiving yards and racking up 157 rushing yards as well. Beckett McNally and Krystian Pavino are also in play at receiver.

Marshall is also returning most of its defensive core. ILB Kenneth Chew led the Barristers in tackles last season as a sophomore, and will be back for more as an upperclassman. Linebackers Vikter Magana and Mahtabuddin Ahmed return as well. Carlos Mendez and Perry Bell anchor the defensive line, while Moises Sosa and Joshua Mejia lead the secondary.

Torres was in the D-2 quarterfinals last season, and has a solid chance at making it again. They’ll be losing a two-way stud in QB/ILB Jorge Zepeda, but are returning most other key cogs. Najiah Harrison can catch and run the ball, and has the speed to rack up major yardage either way. He was good for 533 rushing yards and 291 receiving yards last season. The Toros’ top receiver, Giovanni Avalos, is returning as well.

Defense may be Torres’ strong suit this season. The athletic Harrison doubles as a standout LB/DB. He recorded 104 tackles last season, with 71 coming for loss plus a whopping 13 sacks. Nathan Herrera and Angel Alcantar form a strong OLB/ILB duo as well. Ricardo Vasquez and Joseph Juarez return to anchor the defensive line.

Cameron Senegal is going to have free rein in Monroe’s offense as the only returning top playmaker. He rushed for an incredible 1,633 yards last season as a junior, and can also catch the ball.

This season could go either way for View Park, who lost a bunch of seniors and transfers. Joining the team at offensive coordinator is former Dorsey/Washington star. Whoever wins the job at QB will have WR Tyjari Williams to pass to. The Knights might be stronger on defense, with Chima Uka back at safety. Uka will also be in a featured role at RB after working on his running skills for a whole season of rugby.

University is in a similar boat, losing a lot of key seniors but returning RB/WR Daryl Smith. Smith is also a standout on defense, along with CB Anthony Smith Jr., Minsuh Jung, and Giovanni Bonilla.

Chavez runs a very run-intensive offense and is losing top rushers Angel Magana and Christopher Diaz. That means more opportunities for Mario Felix and Julio Lopez. Last season, they made the playoffs largely due to a solid defense. In case the offense needs time to adjust to the turnover, their defense should be able to keep them in some tough games down the stretch. Lopez and Oswaldo Camacho make a great duo at LB. At 6-0, 260 pounds, Diego Espinoza adds some size inside at NG.

Despite a rough league gauntlet (1-4), Chatsworth did a nice job getting themselves into the D-3 semifinals last season. Their team was heavy on seniors, but they expect to make the playoffs again in 2019.

Kennedy is hoping for a winning season and playoff appearance under new head coach Troy Cassidy, and are returning some defensive pieces to help get things moving. Elias Toscano and Jesus Gonzalez highlight what should be a strong secondary. Parker Brillon and Julian Soto will be tasked with anchoring the interior, along with Kadin Elder.

Hamilton will be looking to win some playoff games after dropping down from D1. New head coach Norris Milton is hoping for a quick turnaround.

The South East Jaguars have several experienced younger players returning after last season’s struggles. Their defense kept them in a lot of games in which they couldn’t score. This season expect them to be significantly more competitive, even if they don’t make the playoffs.