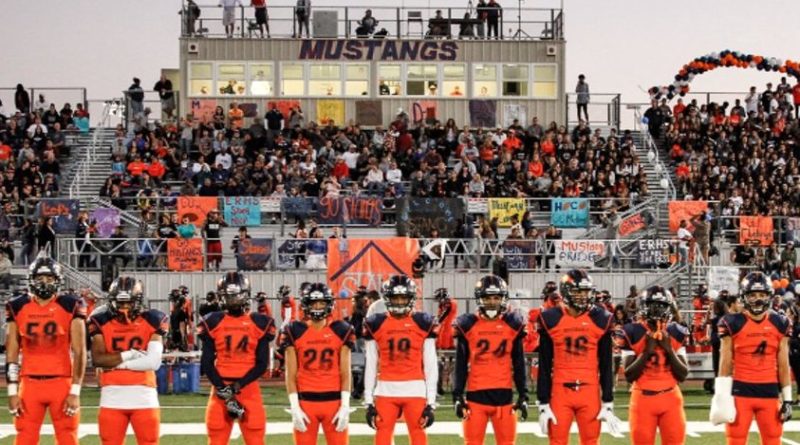 Coach Tommy Leach has a ton of talent coming back, including explosive athlete Kenzel Lawler. Here’s an inside look at the 2019 Mustangs.

Overall record: 5-6 (2-3 in league, 4th in the Big VIII League). Roosevelt lost 55-27 in the first round of the Division 3 playoffs against eventual champs and state runner-up, Sierra Canyon.

Tommy Leach is going into his fourth season as head coach at Roosevelt.

Lawler split the QB position all season long with Xavier Ward, but the 3-star ATH is likely transitioning away from quarterback. He has 5 D1 offers including Cal, and is receiving interest from other big D1 schools such as USC and UCLA. This year, he says he’s transitioning into playing more DB since colleges are recruiting him at ATH. In fact, 247Sports has him as the 58th best ATH in the country.

Austin Marin was the Mustangs’ leading tackler last season as a junior defensive lineman. Since then, he’s grown an inch and added 45-50 lbs. Expect him to be one of the top defensive linemen in all of Division 4.

Pro-style Xavier Ward had an up-and-down season last year, but is brimming with potential. He’s already received an offer from Oregon State, and there’s plenty of reason to expect a breakout year this season as a junior.

Roosevelt played a brutal schedule last season, and are still in the Big VIII league with Corona Centennial and Norco. This year though, dropping down to Division 4 from D-3 might mean a chance at a playoff run.

The quarterback position was split all season long between Kenzel Lawler and Xavier Ward. This season, Lawler expects to move away from QB, which means Ward will presumably be the full-time field general. Pro-style Ward’s 1,015 yards were significant for someone only playing half the snaps at QB. The key for him as a junior will be cutting back on his 13 interceptions. Last year he was raw, but he’s extremely talented — Oregon State has already made him an offer. He will have a returning passing target in SB/WR/RB Tyler Bush.

What Lawler does offensively will be interesting to follow. He’s the 58th ranked ATH in the country per 247, and did rush for 349 yards last season. He also got a few looks catching the ball. He has the physical tools to be a threat to pick up yardage at any position, so coach Leach has an intriguing decision to make on how to use him.

Defensively, Lawler will spent more time as a defensive back, and has the agility to shine. Also returning is their leading tackler, Austin Marin, who’s grown considerably since his junior year. AJ Martinez, Shawn Martin, Carson Paterson, and Phillip Barkley are all expected to be big contributors on defense as well.