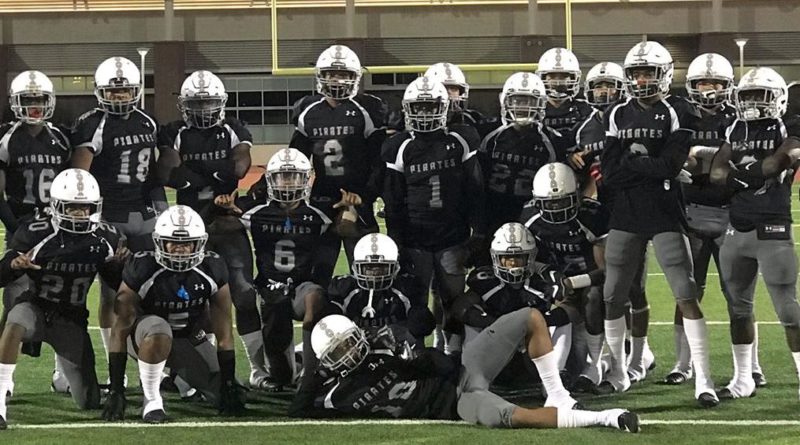 Coach Matt Howard thinks Paramount might have the best offense in the 10 years he has been at the helm. Here’s an inside look at the 2019 Pirates.

Overall record: 7-5 (5-0 in league, first in the San Gabriel Valley League). Paramount lost 41-12 to Grace Brethren in the Division 4 quarterfinals.

At 5-11 and 225 lbs., Kingston Hala is a very strong QB running the show for Paramount. He’s likely to improve on what was already a 2,129-yard campaign last season.

One of the best defensive players in the division, Terrell Taylor has already received offers from Utah State and Army. He led the Pirates last season with 102 tackles, 58 of which were solo. His combination of strength/physicality and mobility will continue to be hard to stop for D4 foes.

Ahmad Parker is a versatile athlete who does many different things well every game for the Pirates. He’s the leading returning rusher and starting RB, the kick returner, and an excellent DB (62 tackles last season). He also recorded 116 receiving yards last year. This season he will continue to do, well, anything and everything Paramount asks of him.

Paramount is returning a ton of talent after a strong 2018 campaign that included winning league in undefeated fashion. The Pirates only went 7-5, but their brutal preseason schedule included St. John Bosco, Bishop Amat, and Bakersfield. This year, there’s a solid chance of a huge leap that could put them in contention for a division title.

After throwing for over 2,100 yards last season, Kingston Hala is back to lead the offense. While star WR Darius Wallace transferred to Cathedral, Hala will still have four excellent receiving threats in Anthony Williams III, Tyron Bates, Willie Cleveland III, and Justin Livingston. Starting RB Ahmad Parker is yet another receiving threat as well.

Per coach Howard, the Pirates might have the best offense they’ve had in his decade at Paramount. The uncertainty will come at the offensive line. Jarred Halk leads what will otherwise be a group of starters lacking experience.

Defensively, they’ll be returning most of their top contributors as well. It starts with versatile OLB/SS Terrell Taylor. He’s strong enough to dominate at the line of scrimmage, and quick enough to chase down playmakers. Taylor, who’s received multiple D1 offers, led the Pirates with 102 tackles last season, 58 of them unassisted.

Also returning defensively are eight other players who recorded 25 or more tackles last season–a great omen. Among them is Xavier Shamsiddeen (MLB), who made 64 tackles last season and has grown since. Justin Livingston (FS) had a strong season despite missing time due to injuries. He’s a strong candidate to break out on both sides of the ball. And then there’s Ahmad Parker, who also excels at DB and recorded 62 tackles last season.

Paramount would need to make a big leap this year to contend for the Division 4 title. And with an unbelievable amount of impact seniors hungry to win, they have to like their chances. At the minimum, they project as a solid playoff team this season. But if everything works out as hoped, the sky is the limit.