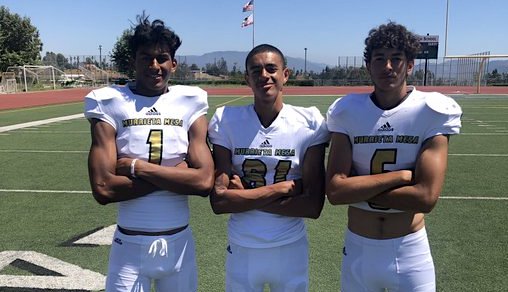 Dual-threat quarterback Jose Ayala IV hopes to have a breakout season for Murrieta. Here’s an inside look at the 2019 Rams.

Overall record: 5-6 (2-3 in league, 3rd in the Southwestern League). They lost 24-3 against Santiago in the first round of the Division 3 playoffs.

Darrel Turner has been the head coach of Murrieta Mesa since 2016.

Ayala split quarterback duties the whole season, and still ended up with 857 passing yards and 591 rushing yards. Those numbers and that experience as a sophomore bode well for what he’ll do in his senior year. While his passing efficiency needs to improve, he could easily be one of the leading rushing QBs in the division.

Thompson returns after leading the Rams in receiving yardage last season with 509. He has great size for a wideout at 6-5 and 185 lbs.

Murrieta Mesa is seeking another playoff appearance this season after dropping down to Division 4. While they will likely struggle to replace the losses of many critical seniors on defense, they’re returning enough talent to compete, particularly on offense.

Jose Ayala IV split time at quarterback all year, and still racked up a lot of yardage. His nearly 600 rushing yards were a lot for a part-time quarterback. Now an upperclassman, his individual progress will likely be one of the most important barometers of this team. Returning to help him out will be last season’s top receivers, Damian Thompson, Andrew Morris, and Reshawn Burleson. Sophomore Desmin Jackson is another intriguing playmaker who showed promise as a freshman both catching and running the football.

The defense is more likely to suffer from inexperience. DT Anthony Moran is a guaranteed impact player on the defensive line. Joining him on the defensive interior will be Jalen Coutee, Craig Hunter, Isaac Contreras, and Ari Collins. All of those guys have the opportunity to step up and make a big difference this season. DBs Tyler Martin and Virgil Martin will be responsible for anchoring the secondary.