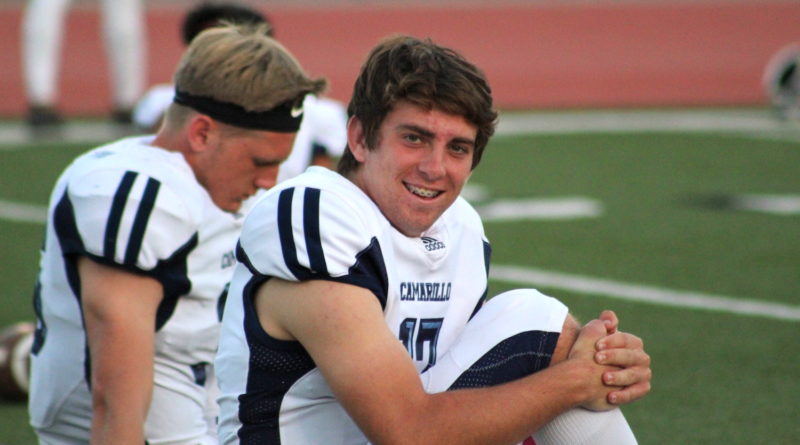 Camarillo returns its top playmakers in QB James NcNamara and RB Jesse Valenzuela. Here’s an inside look at the 2019 Scorpions.

Jack Willard is entering his seventh year as head coach at Camarillo and is 49-27.

Pro-style QB McNamara is receiving interest from USD and Cornell after a huge season throwing the football. He threw for 2,492 yards and an astounding 32 touchdowns. What’s even more impressive is the efficiency with which he did it — 69.1-percent completion and only five interceptions, good for a QB rating of 130.5.

Valenzuela rushed for over 1,000 yards and 13 touchdowns last season. He’s also a major threat to catch the ball, as he recorded 256 receiving yards.

Liddell made 79 tackles last season as a junior. 45 of them were unassisted. He also might expand his role as a wide receiver this season. The 2-star recruit has already received an offer from USD.

After an excellent 2018, Camarillo feels good about their chances this season returning seven starters on both sides of the ball. Their only loss last season before falling in the D-4 semifinals to Corona Del Mar came to intra-league powerhouse Grace Brethren. This year, they expect to remain strong on both sides of the ball, Coach Willard told Scorebook Live. The Scorpions have several three-year starters, and really like their depth, especially on the lines.

Offensively, they return their top playmakers in QB James NcNamara and RB Jesse Valenzuela. Both of them put up monster yardage last season — 2,492 passing and 1,032 rushing, respectively. Senior OT Sam Watson returns to lead their offensive line. Joining him this season will be two new Scorpions in Jackson and Leighton Bateman. Their father played for Camarillo in the 90’s.

The Scorpions project as a strong playoff team this season who already know the ropes of Division 4. If they can maintain their balance and replace what they’ve lost at wide receiver, they could once again go deep into the playoffs.