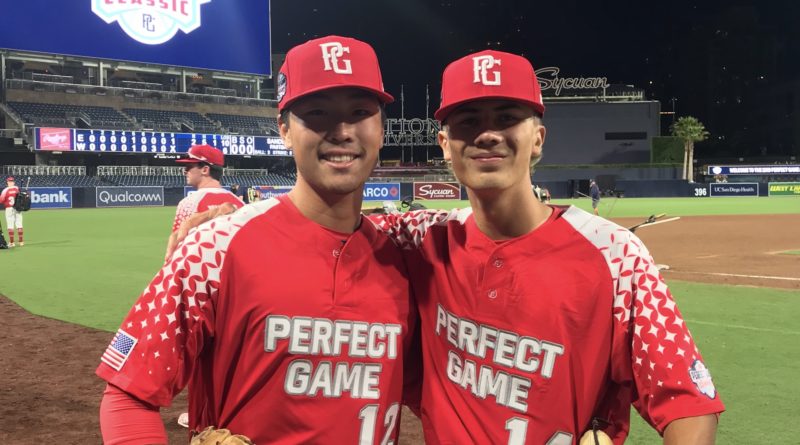 The 17th annual Perfect Game All-American Classic was held at Petco Park on Sunday night, marking the 11th straight year of the game being played in downtown San Diego.

Being the unofficial hosts of the week, Sim and Thompson didn’t seem to let any added pressure get to them despite having tons of friends and family in the stands.

“I wouldn’t really say it’s pressure, it’s really just excitement being here with all these top baseball players in the country,” Thompson said. “We’re just trying to keep loose and have fun knowing that were on this big stage.”

Bryce Harper, Manny Machado, Christian Yelich and Cody Bellinger are among the 182 players that have participated in this game before beginning their Major League Baseball careers.

“I wasn’t as nervous as I was in my other events,” Sim said after the game. “The more I played I just shook the nerves off.”

With so many players participating it can be tough getting each player substantial playing time, which resulted in Thompson and Sim only getting one at bat each. But the honor of playing with the nation’s best outweighed that.

In an All-Star game where there’s a new pitcher each inning you expect them to throw hard, but Sunday’s game was on another level. Speeds of 95-98 MPH were routinely flashing up on the scoreboard at Petco Park.

“It’s super cool just to see that, it’s not something you get to see every day,” Thompson said after the game. “You don’t know (how fast it is) until you’re in the box and see it.”

San Diego’s baseball tradition has been rich for decades, and this game has helped showcase that. San Diego has had a player invited in 15 of the 17 years of the Classic, with multiple players getting the invite in 10 of those years.

“It’s amazing being able to play in front of your friends and family, it’s just a great overall atmosphere,” Sim said. “I’d say it’s up there with one of my most favorite events, memories, moments.”